SCREEN TIME: Out on Film Festival captures the culture 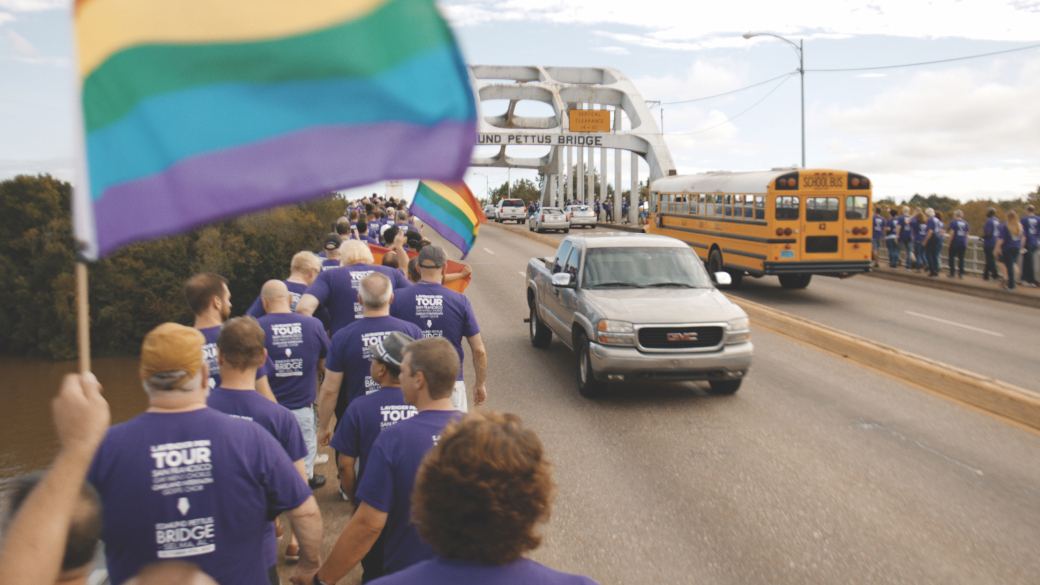 Photo credit: Courtesy of Out on Film Festival
WE SHALL OVERCOME: A scene from Gay Chorus Deep South in Selma, AL
By Curt Holman Wednesday September 25, 2019 11:25 AM EDT

Ever since its founding in 1987, the Out on Film Festival has presented LGBTQ-themed documentaries and narrative films that speak with urgency to the United States’ ongoing cultural conversation. Opening September 26, the 2019 festival presents 126 shorts, web series and feature films that include lighthearted comedies, but many of the films address issues of sexuality, gender identity, and human rights with passion and relevance.

Two of the 2019 festival’s highest-profile documentaries directly address the current political climate, but from different angles. The opening night film For They Know Not What They Do uses the evangelical, conservative backlash against the legalization of gay marriage to profile four Christian families with LGBTQ children. One evangelical Christian couple speak wrenchingly of their gay son and how failed conversion therapy had disastrous consequences.

Three of the four family stories prove particularly compelling, drawing on issues of drug addiction, terminal illness, and, unexpectedly, the 2016 massacre at the Pulse night club in Orlando. Director Daniel Karslake enfolds such additional topics as various “religious freedom bills” introduced in recent years to make anti-gay and trans bigotry legal. For They Know Not What They Do doesn’t quite have time to do justice to some of its topics — it feels like a four-hour miniseries compressed into 90 minutes — but it’s a film of enormous power.

Gay Chorus Deep South also uses the 2016 election as a jumping-off point by documenting a performance tour of the San Francisco Gay Men’s Chorus of the red-state South. The stakes are high politically and personally — many of the interviewees, such as conductor and artistic director Timothy Seelig, had nightmarish experiences coming out in Southern religious communities

The tone tends to be one of hope and reconciliation, with the chorus members having far more positive encounters than they expect. A local activist suggests, in the most polite way possible, that the “big city” tour may be unintentionally condescending to the gay people in small Southern communities. A drag queen’s Patsy Cline number even adds a note of broad comedy to the film’s choral performances, which are uniformly uplifting and sincere. (The Atlanta Gay Men’s Chorus and Women’s Chorus will perform before the September 29 screening.)

As the title Saint Frances suggests, Christianity plays a major role in Alex Thompson’s bittersweet dramedy. Winner of the Audience Award at the South by Southwest Film Festival, Saint Frances follows a 34-year-old underachiever (Kelly O’Sullivan) dealing with the emotional and physical aftermath of a recent abortion who takes a nannying job for a devoutly Christian lesbian couple. Thompson and her cast explore some knotty issues, including post-partum depression, abortion rights, and religious faith, with wit and insight. Plus, young Ramona Edith-Williams gives a grounded performance as a precocious six-year-old who never gets too cute.

It would be nice to say the same of Hannah Pearl Utt’s Before You Know It, but the likable comedy plays it a little too cute in its portrayal of two sisters (Utt and co-writer Jen Tullock) dealing with their playwright father’s (Mandy Patinkin) failing theater. A family tragedy reveals that the mother they never knew (Judith Light) is very much alive and starring in a long-running soap opera. Before You Know It feels cut from similar cloth as the Manhattan romantic comedies Woody Allen used to make, with charismatic performances from Light and Patinkin as well as a lighthearted turn from “Luke Cage”’s Mike Colter. Some of the comedy feels a bit contrived, and Utt underplays her character to a fault, but the film’s sincerity can’t be questioned and leaves the viewer interested in the filmmaker’s next work.

The festival closes October 6 with HAM: A Musical Memoir, a recording of a one-man musical by “Star Search’s” Sam Harris. The October 1 Centerpiece Screening may be Out on Film’s most highly touted movie, Portrait of a Lady on Fire, which won the Best Screenplay Award at this year’s Cannes Film Festival and makes its Southeastern premiere. Like most of the festival’s line-up, it suggests that even a French historical drama set in 1770 can directly reflect today’s headlines.

Space Force: I saw the epic space drama Ad Astra at Parkway Pointe’s AMC Dolby Cinema, which unquestionably kicked the experience up a notch. The presentation includes top-notch sound and projection along with vibrating seats during key action scenes. The shaky seats don’t really add that much — in my experience, they’re more intense during the pre-movie showcase than the films themselves — but Ad Astra deserves better than the dim projection sometimes offered by local film chains. In a screening with sharp, clear resolution, scenes on the surface of the moon, for instance, are the next best thing to being there.

Ad Astra suggests Apocalypse Now transported to our solar system, swapping the madness of the Vietnam War for the inhospitable emptiness of outer space. Brad Pitt plays an astronaut emulating the career of his long-lost father (Tommy Lee Jones), whom he learns may be alive and in Neptune’s orbit. While grappling with his daddy issues, Pitt’s character delivers frequent psychological self-assessments that play almost like theatrical monologues.

The title is Latin for “to the stars,” signaling that director James Gray isn’t afraid of seeming self-important. Fortunately, the film’s deliberate pace and contemplative tone are interrupted fairly regularly by wild, outlandish action sequences — it seems equally influenced by the high tension of Gravity and the heady themes of 2001: A Space Odyssey. Ad Astra has big ambitions but also leaves room for, say, a moon buggy chase scene and shoot-out that still feels consistent with its story.

Some of the recent, thoughtful science fiction films like Blade Runner 2049 have been given cold shoulders by audiences, so don’t let Ad Astra slip away. But be sure to spring for the deluxe presentation. It’s worth it.