BLUES & BEYOND: Symphony for the Devil 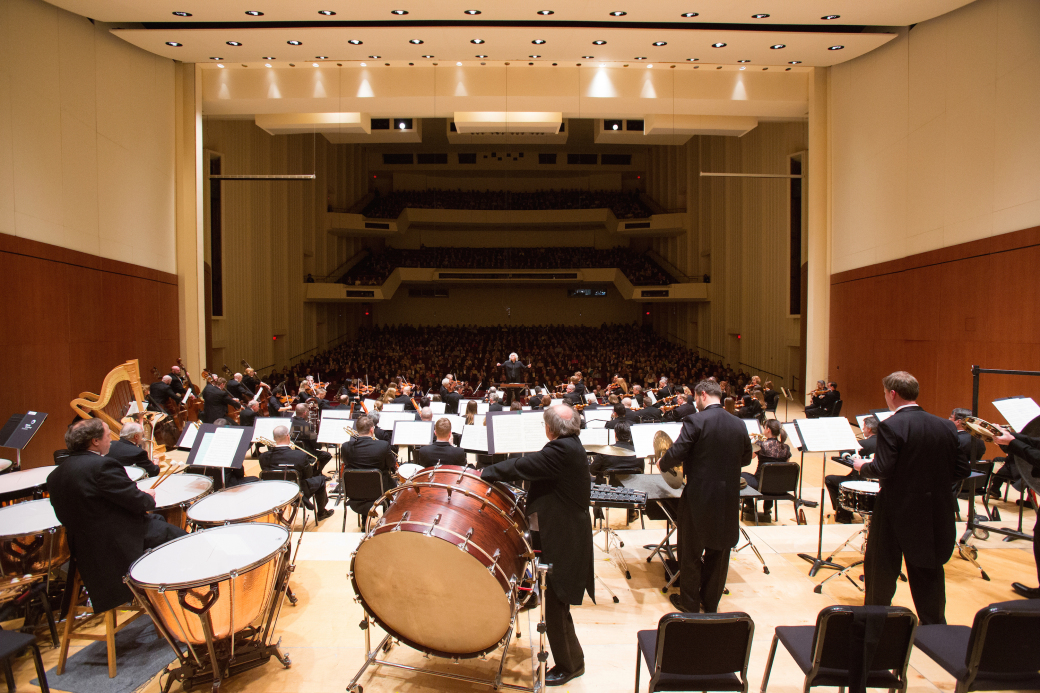 On October 11, the Atlanta Symphony Orchestra (ASO) grapples with the most rock ‘n’ roll of rock ‘n’ roll bands in a program titled The Music of the Rolling Stones: Mick Jagger & Keith Richards 1969. The Stones’ music on the two featured albums from this concert — Beggars Banquet (1968) and Let It Bleed (1969) — is among the band’s most blues based.

Symphony orchestras supporting rock bands in live performance is nothing new. Some might call it cliché. After all, the model can be traced back at least as far as the Moody Blues’ 1967 collaboration with the London Festival Orchestra, which yielded the melodramatic “Nights in White Satin” hit. Deep Purple upped the decibels with 1970’s clunky if well intentioned Concerto for Group and Orchestra, and Procol Harum kicked in with 1972’s Live in Concert with the Edmonton Symphony Orchestra. Once the prog rockers came along, acts like Yes, Renaissance, and Emerson, Lake & Palmer dove in head first. Since then everyone from Frank Zappa and Elton John to Metallica and Portishead has taken a bite out of the symphonic rock genre with varying degrees of success.

But the rock with strings idea has recently gotten a new lease on life. Major orchestras like the ASO, whose budgets are typically tight, are enticing younger audiences into their ornate halls and other venues by combining cover bands — or in the case of Roy Orbison, even a 3D hologram — supported by the weight of an impressive classically trained ensemble. One of the most successful of these projects was devised and helmed by veteran conductor and Berklee College of Music graduate Brent Havens.

Havens started these symphonic rock shows in 1995. Atlanta was one of the first major cities he worked with when they presented the music of Led Zeppelin in 1996. Since then, Havens has conducted the ASO on almost all of his orchestrated superstar series.

“Me and a couple of other guys, back in 1995, came up with the idea,” Havens says. “It evolved from the initial concept to what it is now, where you have a full band and a full orchestra.”

Although first conceived as orchestrating a band or artist’s songs, Havens says, “I thought people wanted to see and hear the music the way they know it, then wrap an orchestra around it. The idea is to bring a new audience to orchestras. We did surveys and found that about 85 percent of people coming to these shows had never seen their local orchestra.”

Havens, who writes charts for every instrument for all shows, sends out the sheet music to the symphony about a month in advance of the gig. He then does a quick run-through after he and the cover band fly into town. Describing the process with the ASO, he says: “We’re talking spectacularly world-class musicians on that stage. We can usually do it in 90 minutes.”

Although Havens has been working with the Stones’ music for a few years, this is the first time he’s focusing on the two iconic albums. ABKCO, which owns this music, suggested he work with these since the label is celebrating their 50th anniversaries. Even though he has performed these Stones songs with orchestras, the set list can still change, although selections are seldom dropped entirely. “You try and make the concert move. It goes from one place to another and it builds up to the ending. Rather than moving a song out, we move them around.”

Havens works with a rotating set of rock musicians talented enough to reproduce the music of Queen, Zeppelin, Bowie, Tom Petty, and others in his repertoire.

“I have three groups and they are all interchangeable,” he says.” We mix and match depending upon the strength of the players … same with the singers.”

His Windborne company might have three or four shows per weekend that each of five conductors lead. But Atlanta gets Havens this go-round, along with vocalist Brody Dolyniuk who Havens says is “an amazing singer” doing his best Jagger-isms.

Not all the songs on these iconic Stones discs will be played.

“I listen to them and ask, ‘Which songs do I really want to highlight?’” he says. “Some are going to be more well-known, like ‘Sympathy for the Devil,’ than, say, ‘No Expectations’ and ‘Salt of the Earth.’” When I mention that the more blues-based material from these discs — such as their raw Robert Johnson cover, “Love in Vain” — wouldn’t seem to logically adapt to orchestration, Havens laughs. “You’d be surprised. I’ve been doing this for a number of years and it might take me a few listens to figure out what I want to do. But I end up making it work, and it works well.”

At press time, longtime Atlanta blues icon Beverly “Guitar” Watkins was recovering from two strokes. The 80-year-old Watkins has been a longtime fixture on the local and national blues scenes, transfixing audiences with her showmanship and gutsy talent. Blind Willie’s held a benefit show for her on September 1, but donations are still being accepted at her GoFundMe page

Fall gets into gear with these “Blues and Beyond” highlights.

Fri., Oct. 4
— Drew Holcomb & The Neighbors, Variety Playhouse. Longtime Atlanta favorite Holcomb has been quietly but consistently honing his affable, earnest, and summery folk-pop-country for over a decade, resulting in a clutch of solid albums and the ability to headline this midsized venue. His easygoing voice and a sure sense of pop hooks kicks in fast, especially on his new Dragons release.

Sat., Oct. 5
— George Thorogood & the Destroyers, The Fred. There haven’t been many surprises in blues-rocking guitarist Thorogood’s career, especially because he hasn’t released an album of new material in over a decade. But no one is looking for anything other than his meat-and-potatoes, guitar-heavy boogie rocking which he is guaranteed to deliver with nearly as much energy as when he started performing over 40 years ago.

Sun., Oct. 6
— Mavis Staples, City Winery. Yep, she’s an American gospel icon. But at 80, Mavis Staples is on a roll. This year alone, Staples has released two albums — one live and one in the studio. Her already larger-than-life personality, radiating love and harmony, will be even more powerful in such an intimate venue.

Tues., Oct. 8
— Marc Cohn, City Winery. Singer, songwriter, and pianist Cohn’s recent collaboration with the Blind Boys of Alabama, Work to Do, has rightly returned him to the spotlight after a few decades where he slipped a little under the radar. His soulful, fervent vocals and righteous songs are plenty impressive on their own.

Thurs., Oct. 10
— Michaela Anne, Eddie’s Attic. It has taken eight years, but Americana singer-songwriter Michaela Anne has finally released the classic album she’s had in her all along, with the recent Desert Dove. Sweeping strings, beautifully crafted songs, and Anne’s alternately soaring and intimate voice are a perfect storm, making this one of the finest albums in her genre this year.

Fri., Oct. 11
— The Music of the Rolling Stones, Symphony Hall. See above story.

— Charlie Parr, Marshall Ruffin, Vinyl. Folk singer and bluesman Parr’s raw acoustic sound is often played on a resonator guitar which infuses a dark, traditional feel. It’s highlighted by his tough, passionate voice and riveting attack on the strings that makes it seem like he has four hands.

Sun., Oct. 13
— ZZ Top, Ameris Bank Amphitheater. Celebrate “that little ol’ band from Texas” on its 50th anniversary. The trio — amazingly all original members — cranks out their fan-friendly catalog of boogie and blues rocking hits with veteran showmanship, if not a lot of excitement. Catch ’em now just in case they decide to call it quits soon.

Fri., Oct. 18
— Anders Osborne, Terminal West. New Orleans-based singer-songwriter Osborne has been churning out blues-based, swampy rock for 25 years, gaining little more than a cult following. Perhaps his new ballad-based Buddha and the Blues will do the trick. His albums only hint at his live intensity, especially as a lead guitarist.

Wed., Oct. 23
— The Tulsa Review, Eddie’s Attic. As the show’s title implies, four musicians from Tulsa take turns rolling out their swampy, easy grooving Southern rock in solo sets, then combine for a collaborative finale. Nothing sounds like the slow-grinding, earthy blues, folk, and jazz made in that town — think JJ Cale and Leon Russell — a spirit these guys try to capture.

Sat., Oct. 26
— Los Lonely Boys, City Winery. The three Garza brothers never followed up on the success of 2004’s Grammy-winning “Heaven,” but have continued to tour constantly, cranking out their fiery combination of Latin, Tex-Mex, blues, and roots rock to a fervent cult following.

Thurs., Oct. 31
— Lee Fields & The Expressions, Terminal West. Soul singer Fields has been banging around professionally since 1969 but has recently found an audience of younger fans attracted to the Dap-Tone label’s organic R&B. His recent spate of releases nails the retro soul sweet spot with subdued power and raw intensity.