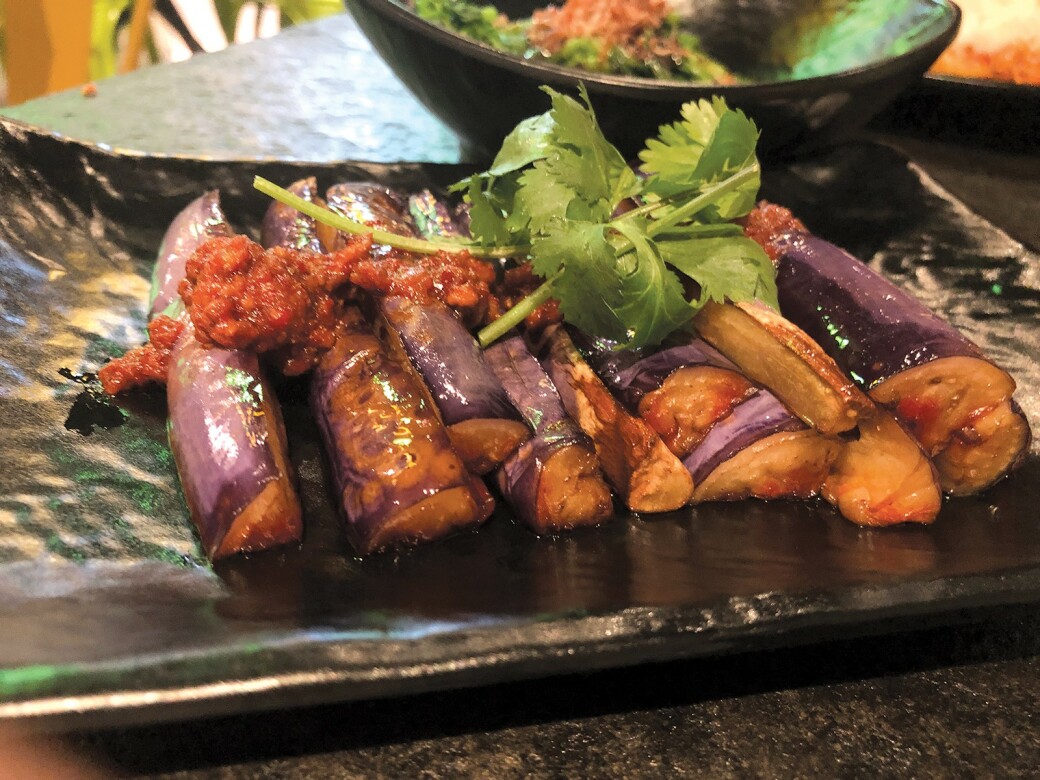 Here’s a question that often haunts you and me when we’re hungry: Does capitalism inevitably produce mediocrity? Specifically, we worry about what often happens when a really good restaurant produces so much money that the owners are required by the rules of the American Dream to open a second location, often followed by even more. Unfortunately, when the “it” restaurant becomes an “it’s everywhere” restaurant, quality and diners’ enthusiasm tend to diminish. We hate this, right? Sometimes it’s temporary.

Two recent openings bring this to mind. One is B’s Cracklin’ Barbecue, which has opened a stall of sorts in the new Beltline Kroger. Second is Food Terminal, which now has a second location in West Midtown. Interestingly, they are both the offspring of restaurants that have been wildly popular in gentrifying locations. Food Terminal comes to Marietta Street from Buford Highway and B’s Cracklin’ to Ponce de Leon Avenue from Main Street in Riverside (following the burning of its full service restaurant there).

The original Food Terminal is a gigantic Malaysian restaurant whose opening two years ago in front of the City Farmers Market represented something of a tipping point for Buford Highway. Many who long avoided the countless mom-and-pop restaurants there swamped Food Terminal, arguably rejuvenating the entire area. Owners Amy Wong and Howard Ewe long ago proved their ability to bridge cultural differences without intimidation or vapid Americanization of the diverse flavors of Southeast Asia that are assimilated to varying extents in Malaysian cooking. Wong and Ewe honed their skills at their other restaurants, including Mamak, five Sweet Hut bakery-cafes, and three Top Spice locations.

The new Food Terminal is a comparatively small space with the same yellow-and-gray color scheme as the original. It features soaring windowed walls and acoustics that make conversation easy. The menu? Imagine one glossy page of food porn after another. By the time you get a few pages in, you are breathing rapidly and can’t remember which dish seduced you earlier. The easier way to explore what’s available is to look at the photo-free check list of dishes on which you’re going to indicate your choices. When something seems interesting on the list, then look up the full-color giant photo of it.

I’ve probably eaten without complaint at the original Food Terminal a dozen times. I found nothing of note off-key at the newbie. I ordered everybody’s favorite — the mythically named  “Grandma Wonton BBQ T Noodle.” It’s a big bowl of noodles tossed (thus the T) in a light soy-based sauce, topped with some sweet slices of glazed pork with enough bark to add a tiny bit of crunch. There’s also mega-crunchy bok choy whose flavor keeps the pork’s sweetness from becoming cloying. You also get three twisted-up fried wontons filled with pork and shrimp. Their flavor explodes, but the exterior texture last week was a bit soggy. Finally, the noodles were topped with a fried egg. This one was way over-cooked for my taste. Isn’t the point for the yolk to add a velvety, rich component to the bowl? This egg barely yielded a drop of yolk. That’s my only complaint.

My favorite on the table was a plate of watercress tossed with a black bean sauce. I don’t think I’ve ever eaten at Food Terminal without ordering it. I also love the Thai eggplant, purple logs of the creamy vegetable topped with a chili sauce and ground chicken. We also ordered a plate of mildly spicy beef rendang with nasi lemak (rice cooked in coconut milk). The rendang, to which I earlier became addicted at Mamak, also included an over-cooked egg, along with some pickled vegetables, slightly fishy crackers, and peanuts.

Understand that it would take you forever just to count what’s available here. I intentionally ordered less exotic dishes in order to set a baseline, and the good news is that capitalism hasn’t ruined the quality of Food Terminal! The restaurant, by the way, is part of the Brickworks complex, so an entryway to free parking is immediately next door. You might have a wait. I went on a Monday night, and the restaurant was quite busy. 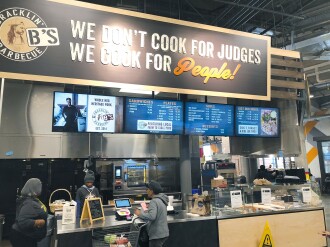 DON’T JUDGE: Belly up to the counter at B's Cracklin' Barbecue in the Beltline Kroger. Photo by Cliff Bostock. 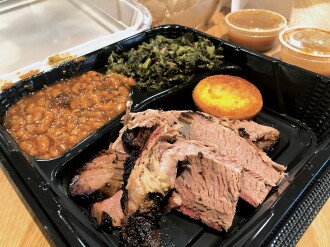 IT’S ALL GOOD: The brisket, collards, pork and beans, and a corn muffin at B's Cracklin' Barbecue. Photo by Cliff Bostock. 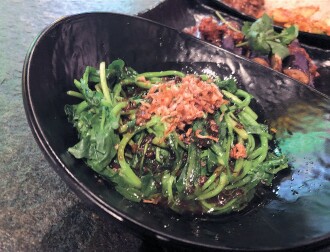 GET YOUR VITAMINS: Order Food Terminal's watercress in a black bean sauce. Photo by Cliff Bostock. 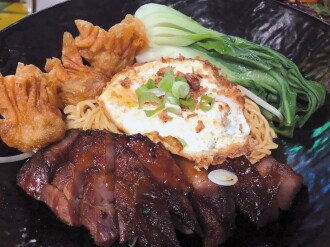 Yes, you really should go to the former Murder Kroger, now called the Beltline Kroger, and make a beeline for the new outpost of B’s Cracklin’ Barbecue. Brian Furman’s original Atlanta restaurant in Riverside burned to the ground in March 2019 after a few years in which it won just about every conceivable honor imaginable and not just in barbecue categories. Eater, for example, named it restaurant of the year and Furman was a James Beard semifinalist for best chef. I’m happy to say this is not the all-too-common foodie habit of fetishizing a quirky restaurant for the sake of in-the-know novelty. It deserves the accolades.

The fire here weirdly duplicated the burning of Furman’s first restaurant in Savannah. It was re-opened and Furman promises to do the same here. Meanwhile, you can get the barbecue at the Kroger stall and eat on the premises, if you choose. (There’s also a stall at State Farm Arena). While the Kroger setting is a bit off-putting, the barbecue is certainly not. I’ve only been once and tried the ribs and the brisket. The brisket was absolutely perfect — fatty but not too fatty, smoky but not so much that the flavors of the rub and the meat were eclipsed. Ditto for the ribs, which you can eat without emerging from the area looking like a blood-doused zombie because of Georgia’s typically ketchupy sauces. Personally, I love B’s because its sauces are made with vinegar or mustard like the barbecue sauces I grew up eating in the Carolinas. In truth, you don’t even need a sauce with this meat.

The chopped barbecue, by the way is “whole hog.” That means Furman smokes an entire, pedigreed pig, and the meat is pulled from different areas. It’s not all butt! I’ve also sampled the collards and pork and beans. Those aren’t particularly notable. (Do try the hash.) I asked for cracklin’ cornbread but received a super-sweet corn muffin. Probably my only complaint about B’s has been its failure to match my mother’s cracklin’-heavy cornbread. You really need that with the collards.

So, as with Food Terminal, capitalism has also failed to turn the multiple iterations of B’s into mediocrities. But I won’t be really happy until the full-service restaurant re-opens.

HERE AND THERE: I recently dined at Nuevo Laredo, the restaurant that brought so-called “border cuisine” to Atlanta 20 years ago. I was a frequent customer early on, but the long waits and burgeoning Mexican/Tex-Mex scene caused me to drift away. A few weeks ago, four of us finally scored a table. The place has not changed. It still pays kitschy homage to Our Lady of Guadalupe, and the walls are covered with photos of everybody. There is one dish here to which I became addicted from day one: the chicken mole. I still think Nuevo Laredo’s mole is the best I’ve tasted in the city. I also ordered my old favorite, the grilled green onions. Get the queso with chorizo, and, if you’re craving beef, the tampiqueña steak rules …. I have no idea why, but the mainly well-reviewed Kajun Crab on Buford Highway served the same four of us a really, really disappointing meal. The restaurant features the hard-to-define Vietnamese-Cajun cuisine that developed in Louisiana. (It’s also served at the nearby Crawfish Shack.) The menu we’d seen beforehand said the restaurant served pho. There was no pho on the current menu. I thought my friend was dumb to order the seafood boil made with frozen crawfish, and I was right. A bowl of spindly pasta with seafood was tasteless. My bowl of seafood and potatoes in a nondescript sauce included sausage that would give you nightmares if I could find the words to describe it. Gumbo? It was okay ….

Do you know what the real problem with rainy, cold weather is? It makes you sit inside at Fat Matt’s Rib Shack on Piedmont. That was the situation when I lunched there recently. The ribs and chicken were delicious, as always, but the live, ear-splitting performance by a solitary man made conversation impossible. You will be fine if you know American Sign Language or don’t mind getting barbecue sauce all over your phone while you text your tablemates ….

I feel honor-bound to admit that my last visit to Popeyes was dreadful. I got the five-piece combo special. The chicken was grossly over-cooked, and the biscuits were literally burned and stony. The red beans and rice were the usual tablespoonful. I learned long ago not to leave the restaurant without checking my order, but I failed to follow my own advice. I did call when I got home. Me: “You gave me burnt biscuits and chicken so overcooked that I can hardly pry the meat off the drumstick.” Her: “I don’t have time for this.” Me: “What should I do?” Her: “Have a wonderful Thanksgiving.” Meanwhile, like the sandwich it honors, the Popeyes ugly Christmas sweater sold out in 14 hours. There are no plans to restock it. I mean, come on people! — CL—