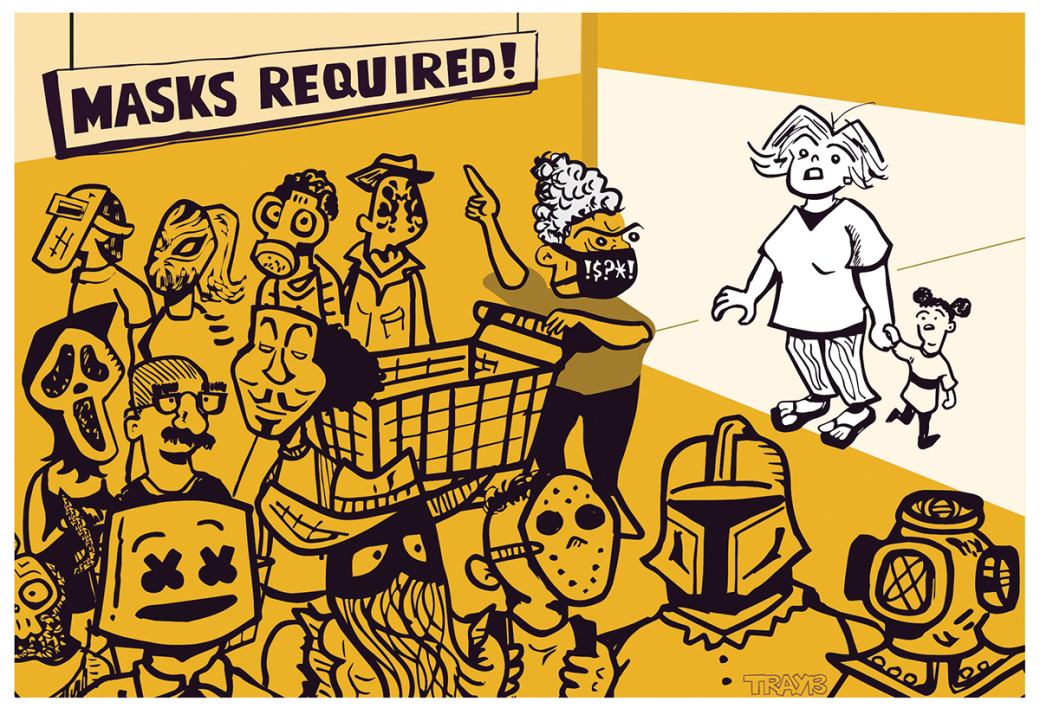 A young maskless mother said she and her three maskless children entered a Walmart in Gainesville, Georgia — and promptly got berated by a fellow customer (a masked middle-aged woman).

The two exchanged words, and the maskless mother snapped, “You’re so ridiculous. Take care of yourself. Bye.”

Then, the masked woman yelled, “I hope y’all die because you’re gonna kill me and my husband.”

Later, the maskless mother added: “Whenever it all ended I just walked off and was shaking on the inside, and I started crying because I was so upset. She was attacking the people that were coming in without masks, and everybody was just kind of ignoring her and walking on and going on about their business, but I just didn’t feel that it was right that she was wishing death upon people for not wearing a mask.”

This was two days after Walmart announced a national mask policy for all its U.S. stores.

The maskless mother said, “There was a man at the door who said if you have a mask can you please put your mask on, and we didn’t have any with us — but he didn’t say that we couldn’t come in.”

DUMBASS OF THE MONTH: Coweta County police stopped a 28-year-old man using his cellphone — without a hands-free device — while driving and allegedly weaving all over on 1-85.

During the stop, an officer smelled marijuana coming from the driver’s Dodge Ram, prompting a search of the pickup truck. They found 15 pounds of alleged marijuana, $33,498 in cash, and a loaded handgun — inside a duffel bag.

You’d think with more than $33k stuffed in a duffel bag, the driver could spring for a hands-free device for his cellphone!

The 28-year-old driver now faces two felony charges (trafficking marijuana, possession of a firearm), plus a host of driving violations. He was released from the Coweta County Jail after posting $75,000 bond.

WON’T YOU BE MY NEIGHBOR?: In Roswell one evening, a man allegedly used a ladder to climb on top of his neighbor’s suburban home. The Roswell homeowner saw the man on his home security system video — and called police before confronting the weird 28-year-old dude on his roof.

Apparently, the man on the ladder was trying to peep at the Roswell family. Police showed up and questioned him: Why are you on the roof? The man said he was looking for a missing cat.

Roswell police do not believe this was the first time the 28-year-old had been peeping on his neighbors. He’s now charged with Peeping Tom.

SOUTHERN NAME CHANGE: A brouhaha broke out over a street named after Jim Crow in Flowery Branch, Hall County. The local city council voted to change the name in July because they wanted to send a positive message — but they didn’t realize the Jim Crow Street was named after a person and not a segregationist movement. The council “had no idea the street was named after an actual person.”

Apparently, Jim Crow was a well-known farmer in Hall County — and they named a road after him.

“He went out of his way to help the people in his community,” reports WSB-TV.

Crow’s family members recall that “he would help feed families, he would even, when families couldn’t afford a proper burial … use lumber from his lumber yard to actually build the caskets for these family members.”

But Jim Crow is not the farmer’s real name. He was born Glennon C. Crow. After his mom died, an aunt who raised Crow nicknamed him Jimmy. Eventually, the nickname evolved into Jim.

His nephew Randy Crow says, “Nobody had any idea it could be racial or anything.”

The street will be renamed G.C. Crow Road. The Flowery Branch City Council has ordered new road signs … but apparently the pandemic is slowing down production.

The City of Flowery Branch also plans to put a plaque in a nearby park in Hall County explaining who Jim Crow (the farmer) was and his legacy, according to Mayor Mike Miller.

According to a U.S. Attorney’s Office press release: The 23-year-old “planned to conduct a terrorist attack on the White House as part of what he claimed was his obligation to engage in jihad.”

Undercover agents met with the 23-year-old, who showed them his sketches of the White House. Also, the 23-year-old described the types of weapons and explosives he was going to use in the attack.

FBI agents arrested the 23-year-old when he showed up at a pre-arranged meeting where he expected to obtain assault rifles, explosive devices, and an antitank weapon.

In late July, the 23-year-old was sentenced to 15 years in prison, plus three years of supervised release.

WATER WARS: Atlanta City Council President Felicia Moore is calling for Atlanta’s “bottle boys” to be cleared from the city’s intersections. “Bottle boys” are youths trying to sell bottles of water to people in cars passing by.

Moore says: “The boys are either going to get hurt or they are going to hurt somebody.”

Last weekend, in Buckhead, a motorist hit a nine-year-old bottle boy at a busy intersection. The boy wasn’t seriously hurt; the motorist fled the scene.

Another motorist says a teenage bottle boy, who hurled a water bottle at his car after he refused to buy it, accosted him. This incident also took place in Buckhead. The motorist does not think the teen should be arrested. He says, “Stop the aggression, stop the assault, and it’s all good. I’ll buy your water.”

SOCIAL-DISTANCING SNAFU: An Oakhurst woman writes: “My friend and I were walking on East Lake a block away from the Banjo house. We saw a man approaching. It was dark, and with social distancing and spacing, we decided to walk in the street so he wouldn’t have to wait for us to pass or vice versa.  As we stepped in the street, he started fussing and questioning why we didn’t want to walk past him on the sidewalk. He was loud, rude, and may have been inebriated, but he tried to make a scene and started using profanity. I walk all the time and move off into the street as to let others pass, especially when I’m not alone. I really was offended by it and a little spooked.” —CL—

The Blotter Diva compiles reports from the Atlanta Police Department and local news reports and puts them into her own words.