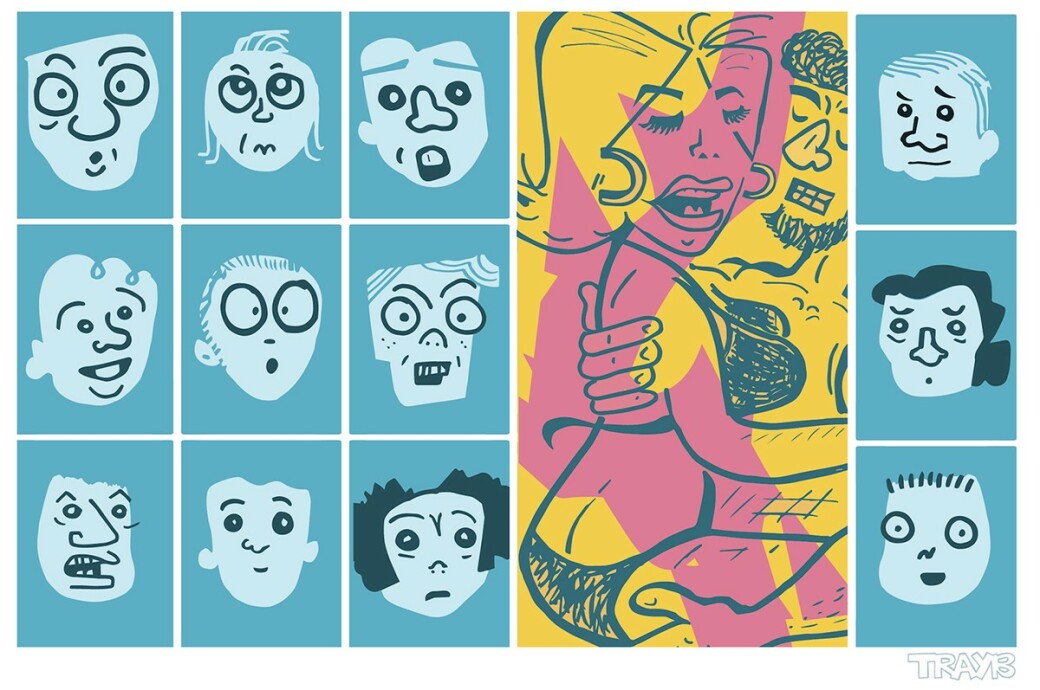 “Students: If you stream pornography, nudity, or any sexual acts in an online class, we will find you and charge with you with life-altering charges. We’re 24 hours in — and I’m over it. Talk to your kids. This is not a joke ….”

The note went on to list several potential charges. It’s unclear who the “I” in the note “I am over it’ actually is — but the note was posted by the Henry County Police Department. Oddly, their FB post was yanked after one day.

According to a Henry County Schools spokesperson, at least one high school student posted “inappropriate imagery” in a virtual class.

BLOTTER HERO OF THE MONTH: A female member of the Oakhurst Neighborhood FB group posted this: “To the person who keeps putting pro-Trump stickers on the trash can directly outside of our house: You may think I will tire of taking the time each week to peel it off corner by corner, crumble it into a small pathetic ball, say a cuss word loudly as I look around for you, and throw it in the trash with lots and lots of force, but let me assure you, as God is my witness, I will not.”

SIGN OF THE TIMES: In Gwinnett County, the sign outside Sugar Hill Bakery and Café reads: “We Do Not Wear a Mask; We Do Not Social Distance.” Female Employee #1 says, “I just want people to know that when they enter, that we’re not gonna be wearing them.”

Female Employee #2 tells cbs46.com that she loves the freedom of working without a mask, and that’s exactly why she recently started working at the bakery/cafe. “There’s things you can do to build your immune system that are a lot healthier than a mask … Vitamin C, Vitamin D.”

Get this: Customers are required to remove their masks before entering the Sugar Hill Bakery and Café.

Female Employee #3 says, “I don’t want someone who has been touching their mask all day to touch my food.”

All three employees also refuse to social distance inside the bakery/cafe.

Yes, Georgia governor Brian Kemp’s latest executive order mandates that restaurant employees do the exact opposite of what these three nutballs are doing. We shall quote it: “Restaurants and dining services shall ‘require workers to wear face coverings while interacting with patrons’” and “‘increase physical space between workers and patrons.’”

And what do these three employees have to say about Gov. Kemp’s face-covering requirement for restaurant workers during this pandemic?

Employee #2 says she’d rather risk her life than live her life in fear. “If the word of God is true, why are people, especially Christians, hiding in fear? The Lord promises to take care of us. We have to live in faith.”

STUPIDEST SNOOZE: Deputies in Coffee County, Georgia, described perhaps their easiest catch of the month in a Facebook post titled “The Early Bird Catches the Worm … Or in This Case, the Wanted Fugitive.” A young man allegedly stole a truck and committed a few other crimes. Deputies responded to a call about his suspicious behavior and started chasing him. The male suspect managed to elude the sheriff’s deputies — for the evening.

“Deputies searched the Huffer and West Green areas but were unable to find the suspect.”

Apparently, after eluding deputies, the male suspect then decided to celebrate his freedom by taking a nap. A costly little nap.

“Early (the next) morning, deputies returned to the area (where the suspect) was last seen and found him asleep in a truck off of Joe Ellis Road in West Green.” The suspect was promptly arrested, handcuffed, and charged with auto theft, trespassing, and a half-dozen other charges.

STATE OF THE UNION: East Atlanta’s monument honoring Civil War Union General James B. McPherson was mysteriously and severely damaged in August. Of the metal railing and columns that surround the statue, 75 percent were smashed and knocked over. (To be clear, McPherson’s memorial statue is not one of himself. Instead, it’s an upright cannon alongside a historical marker clearly noting that this is the spot where McPherson, the second highest-ranking Union soldier killed in the Civil War, was fatally shot in the back during the Battle of Atlanta on July 22, 1864.)

As noted on a WXIA newscast, the unassuming Monument Park homage to the Union Gen. McPherson takes up less square footage than most of the neighboring front yards that surround it.

Longtime East Atlanta resident and monument gardener Lenora Scott says, “It’s sad for people to just destroy stuff for no reason at all — unless it’s hatred. A lot of people think that this is a Confederate monument, but it’s not. General McPherson was a Union man. Many people don’t know that.” Scott, an African-American woman, has been caring for McPherson’s statue and using her green thumb to revitalize Monument Park for 15 years. She’s taken such good care of it that one of McPherson’s descendants in Scotland started corresponding with her and thanks her regularly.

“The damage seems to be more extensive than mere vandalism,” according to WXIA. There are no suspects at this time.

When Gen. McPherson was killed, Union general Ulysses S. Grant reportedly said, “The country has lost one of its best soldiers — and I have lost my best friend.”.

Just FYI, the Blotter Diva lives less than three blocks from McPherson’s monument, walks by it every single day, and takes this act of planned destruction a wee bit personally. One might think: Did someone deface McPherson’s memorial because they are stupid — thinking it was a Confederate memorial by mistake? The Blotter Diva says: Fat chance! The words ‘Union soldier” are all over McPherson’s memorial and Monument Park. Besides, police say the extensive damage looked like planned destruction — not spontaneous vandalism. —CL—