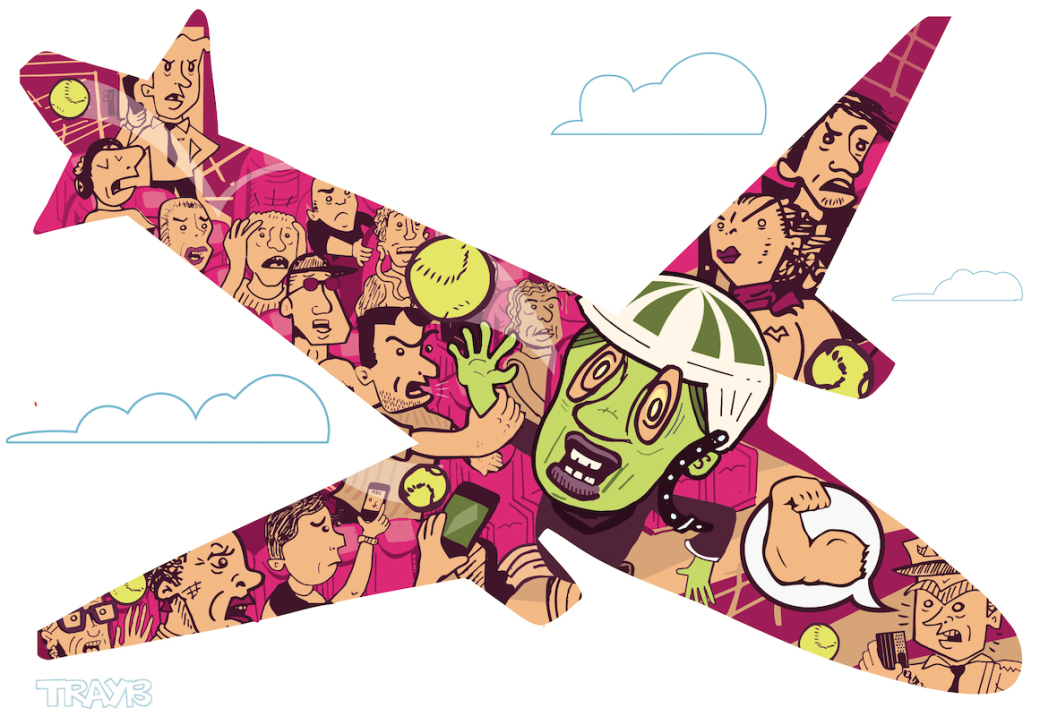 Passengers on a recent Delta Airlines flight from LA to Atlanta got a hell of a chaotic ride. Midair, the pilot suddenly came on the intercom to say: “Ladies and gentlemen, this is the captain speaking. We’d like all strong males to come to the front of the aircraft to handle a problem passenger.”

The problem? A 34-year-old Atlanta man (who’s an off-duty Delta flight attendant) wearing a helmet. Crew members said the 34-year-old “was exhibiting strange and paranoid behavior,” such as stashing weird items — tennis balls with writing on them, trash, and food — in various places on the plane.

Apparently, the 34-year-old allegedly tried to take over the plane’s PA system, threatened to bring the plane down, and attacked two flight attendants.

Several sturdy male passengers rushed up and started wrestling with the 34-year-old, trying to control him. “Keep him down, keep him down!” someone said.

The Delta plane made an emergency landing in Oklahoma City, where the 34-year-old was removed and taken to jail. Police searched the plane — found nothing suspicious — and the flight eventually went on to Atlanta.

One passenger said the man tried to open a cabin door mid-flight, but a Delta spokesman told the Atlanta Journal-Constitution that was not the case. Police say the 34-year-old exhibited “signs of mental health issues.” The FBI is investigating.

CAN'T YOU HEAR ME KNOCKING?

A tacky tourist move on Tybee Island + the power of social media = historic preservation. Someone swiped the 155-year-old historic brass doorknob from the observation deck door of the Tybee Lighthouse tower.

“While it may seem like just a doorknob to some, to all those who love Tybee, it’s an important piece of the island’s history,” wrote the Tybee Island Police Department on Facebook.” We’d love to see it back in its rightful home.”

Police officers got busy, reviewing surveillance footage from the Lighthouse, which appears to show a gray-bearded man removing the historic doorknob and putting it in his khaki cargo shorts pocket.

A photo of the gray-bearded man was posted on the Tybee police’s Facebook page, and concerned citizens shared it nearly 3,000 times online in 24 hours, bringing in “an abundance of tips,” according to WSAV-TV. One crucial tip focused on a guy living in Indiana. Tybee detectives worked with the Greene County, Indiana, sheriff’s office and confirmed the Indiana man was the suspect they were seeking.

Sheriff’s deputies paid the Indiana man a visit — and recovered the historic brass doorknob from his home. Less than a week after it was stolen, the doorknob was sent back to Tybee Island. Charges are pending against the gray-bearded man. What’s still unclear: What did he plan to do with Tybee’s stolen brass doorknob?

Next time you visit Tybee Island, check out the historic Lighthouse, with its 155-year-old doorknob that inadvertently took a side trip to Indiana.

Two men claiming to be tree trimmers are accused of robbing a Buckhead couple of fancy jewelry worth $100,000-plus.

Here’s how the scam went down: One man knocked on the front door of the couple’s tony home off West Paces Ferry Road. The Buckhead wife answered, and the man said he was about to start tree trimming in the neighbor’s yard and wanted to make a courtesy call. “I’m just going to show you exactly what we’re doing,” the man says, according to Ring surveillance footage obtained by CBS46.com. The Buckhead wife agrees to meet him in the back yard.

Pronto, Dude #2 walks up, knocks a few times on the door, checking multiple entrances, and slides inside the open back door. Then, he snags more than $100k in jewelry. The two men, ages 27 and 23, left in a Chevy Suburban. They were arrested in New Orleans. According to WSB-TV, Atlanta investigators are still looking into whether the two men … had other victims in the Buckhead neighborhood.

The brother of NBA Portland Trail Blazers center Enes Kanter is allegedly one victim of an armed robbery in downtown Atlanta. The incident happened around 4 a.m. at the parking deck of an apartment complex on Courtland Avenue.

Atlanta police released the 911 call, in which a woman with Kanter’s brother says: “We just got robbed at gunpoint. They took my phone; they took my boyfriend’s chain. They took everything.” She said the robbers had laser pointers on their guns pointed at them.

The woman continued, “I need you to find this person because this is ridiculous; do you know how much taxes I pay to this fucking town? … I do not deserve this … I just had two guns pointed at my head. I feel like a hostage in my own country.”

Hours later, the NBA’s Enes Kanter tweeted surveillance video of the alleged armed robbery. “I’m shocked and disgusted,” Kanter wrote. “My little brother (Ahmet) walking around Atlanta, gets a gun pulled on him, and robbed.

“When will we have some normal gun control measures? This is not okay & not normal. We need to keep demanding peace & change, and stop putting guns in people’s hands.”

Here’s your common-sense crime tip of the month: Don’t be a dumbass and leave your precious car keys in the ignition with the engine running, while you’re pumping gas. Why? Atlanta police are warning of a summer uptick in slider crimes, where a crook (a.k.a “slider”) slides into your car and snatches your cell phone, purse, or your whole entire car — while you stand there like an idiot with your hand on the gas pump.

Case in point: Atlanta’s Grammy-nominated singer and music producer Akon was recently a victim of slider crime: His luxury SUV was swiped, while Akon pumped gas after midnight at the QuikTrip on Sidney Marcus Boulevard.

“He stated that when his tank was almost full he noticed his white Range Rover ... pulling off while he was still pumping his gas,” Atlanta police said in an incident report.

Akon tells police he watched as his Range Rover made a right onto Sidney Marcus Boulevard and was followed out of the gas station by a dark-colored sedan.

Akon’s cellphone was in his car when it was stolen, according to the Atlanta Journal-Constitution. Akon used an app to track his Range Rover to Lawton Street in southwest Atlanta, but it was gone by the time police arrived. The next day, Akon located it in Forest Park, where police recovered his car.

Slider crimes happen all the time, people. Wise up: Turn off your car and grab your keys before pumping gas. —CL—

The Blotter Diva compiles reports from the Atlanta Police Department and local news media — and puts them into her own words.