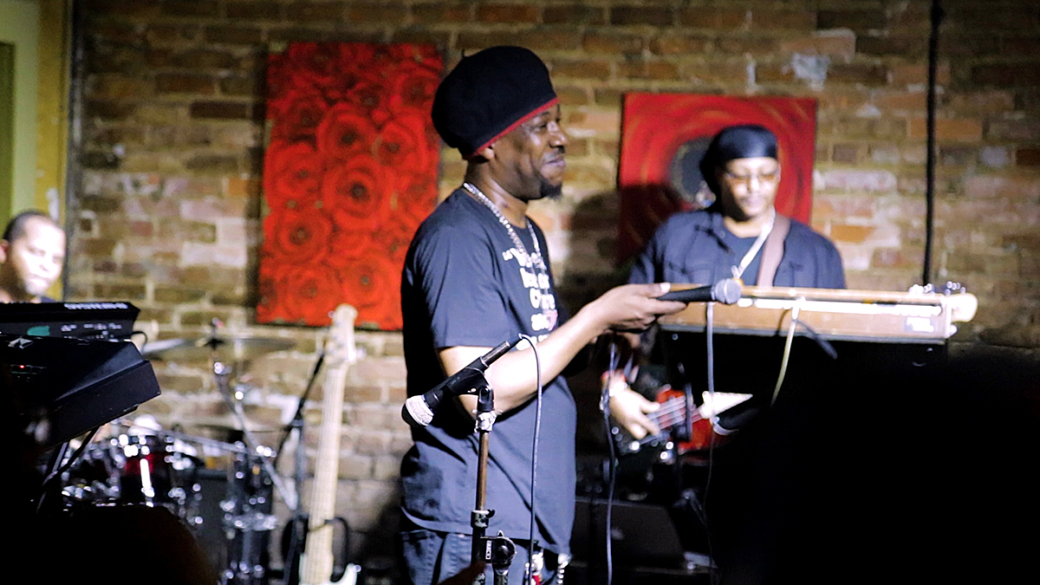 Two new documentaries prove that live music can be the best time capsule. A recording of a band playing at a venue does more than capture a single song. Look and listen closely enough, and you can find evidence of the fashion and tastes of the era, the trends in genre and performance styles, even traces of the politics of the time.

Spring & 3rd, a tribute to Atlanta’s long-lost but beloved Yin Yang Café, makes its world premiere at the BronzeLens Film Festival, the 12th annual showcase of films by or about people of color. Like last year, the 2021 festival will be a virtual event, screening more than 180 selections, including documentary and narrative shorts and features, music videos, webisodes, and student films.

Early in Spring & 3rd, filmmaker and spoken-word artist Malik Salaam digs deep into the roots of Atlanta’s Black cultural scene, barely mentioning the Yin Yang Café for the first 20 minutes. Instead the film cites the influences of Mayor Maynard Jackson, the Atlanta University Center as a creative incubator, the rise of local hip-hop artists and the thriving club scene of the 1990s.

But, as narrator Big Rube says, “Atlanta’s nightlife had not yet made room for the quote-unquote weirdos.” The film tracks how, from 1994 to 2000, the Yin Yang Café cultivated the city’s neo-soul movement and provided a home for spoken word, jazz, and funk as an alternative to mainstream hip-hop. Interviewees include successive owners Reggie Ealy and Freddy Luster, as well as seemingly countless musicians, promoters, scenesters, and fans.

Spring & 3rd can leave you wishing it had more performance footage, although it offers tantalizing clips from songs and jam sessions by bassist Divinity Roxx and “house band” The Chronicle. “Never Scared” rapper Bone Crusher, who also served as the Yin Yang’s cook, is one of the most likable interviewees, at one point describing the night of a legendary Erykah Badu set, and then having to clean the toilets afterward. By relying on an abundance of talking-head interviews and impassioned stories, the Yin Yang Café looms larger in the viewer’s imagination.

Where Spring & 3rd finds a microcosm of one city’s artistic community in a 200-capacity club, Summer of Soul: Or, When the Revolution Could Not Be Televised draws together some of the country’s most talented Black performers in their prime. Director Ahmir “Questlove” Thompson assembles long-neglected footage from the 1969 Harlem Cultural Festival, where the summer-long lineup included the likes of Sly and the Family Stone, Gladys Knight & the Pips, Stevie Wonder, and Nina Simone.

One of the best films of 2021, Summer of Soul debuted on Hulu in July and juxtaposes a treasure trove of electrifying performances with thoughtful context on the 1960s as a transformative decade in African-American life, from the fight for civil rights to the flowering of Afrocentric fashion. Like Spring & 3rd, Summer of Soul makes the past feel alive in ways that books and museums can seldom match.

Gwinnett Place Mall played fictional “Starcourt Mall” on the third season of Netflix’s “Stranger Things.” North DeKalb Mall, meanwhile, has hosted productions such as “Cobra Kai,” “MacGyver,” The Mule, Zombieland 2, and, most recently, Netflix’s Fear Street. Where “Stranger Things” evokes the horror adventures of the 1980s, including the films of Stephen Spielberg and John Carpenter, Fear Street conjures up the trashier thrills of different eras.

Kind of a triple feature of interrelated films based on the work of R.L. Stine, Fear Street begins in 1994 in the cursed town of Shadyside, where teens investigate a mystery with plenty of nods to pop-savvy slasher films like Scream. The second chapter flashes back to 1978 for Friday the 13th-style murders at a Shadyside summer camp, and the last entry goes all the way to 1666 to excavate the origins of the evil plaguing the community. At best, director Leigh Janiak has audacious fun with its gimmick, showing the way teenagers of different decades — or centuries — have a universal desire to go off and enjoy sex and drugs. Fear Street feels more frivolous than “Stranger Things,” perhaps because it draws from lesser source material, but it curries favor with horror fans with its R-rated gore and sexuality.

As an occasional visitor to North DeKalb Mall, I’m struck by how it’s a more effective movie set than a place to go shop or eat. Perhaps the management should lean into the rosy memories we have for 1980s mall culture, and make it a monument to the Reagan era. Like the way the Georgia Renaissance Fest represented a 1985 Ren Faire set in Oshkosh, Wisconsin, on a 2020 episode of Disney+’s “Loki,” the mall might have a brighter future as a historic recreation.

Coming Attractions: For an unconventional place to find a film, The Bitter Southerner magazine has released a 14-minute short called “Still, Life.” The account from local couple Gray Chapman (writer and narrator) and Dane Sponberg (director and editor) tracks Chapman’s pregnancy during the 2020 pandemic. The film contrasts their preparations for a new life against the deaths and dislocations of the summer of 2020.

The film doesn’t avoid the grim content in its premise, acknowledging the death toll and offering imagery like a playground closed off with police tape. But more often, Chapman and Sponberg complement details of her pregnancy with shots of the couple’s home garden. “Still, Life” unfolds as a hopeful, meditative personal essay, and it’s nice to watch a film that embraces hope at a time of uncertainty. —CL—