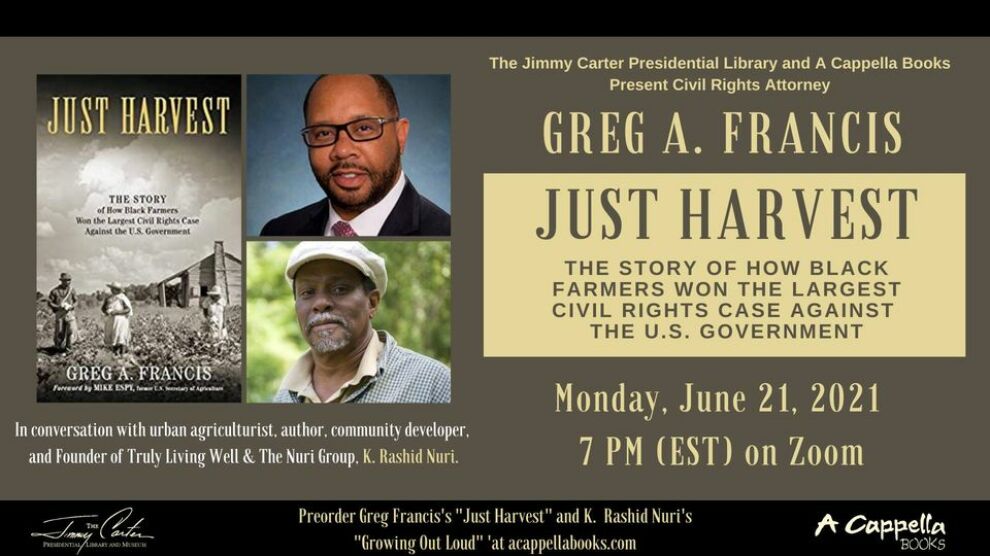 When a class-action lawsuit against the US government results in a billion-dollar settlement for the aggrieved parties, you’d expect the story to be headline news . . .to be posted on social media everywhere . . . to be adapted to film or even to a popular legal procedural series on TV . . .

The Jimmy Carter Presidential Library and A Cappella Books welcome Civil Rights attorney and author Greg Francis for a virtual discussion of his new book “Just Harvest: The Story of How Black Farmers Won the Largest Civil Rights Case against the U.S. Government,” on Monday, June 21, at 7 PM (EST). Francis will appear in conversation with trailblazing urban agriculturist, author, community developer, and Founder of Truly Living Well & The Nuri Group, K. Rashid Nuri

This event is free and open to the public. Join the event via the Zoom link. A Cappella Books will have copies of both "Just Harvest" and K. Rashid Nuri’s book, “Growing Out Loud: Journey of a Food Revolutionary” available after the event. Pre-order copies here: https://bit.ly/2T9kUSr

About the Books
“Just Harvest”

Why have so many people never heard of Pigford vs. Glickman?

Or the follow-up lawsuit, Pigford II?

Or the Black Farmers Case, as the pair of these legal actions is often called?

Could it be that the heart-wrenching story of Black farmers in America, and the monumental legal case that brought long-sought justice to them, is rarely told because it reflects so poorly on the US and its treatment of those whose ancestors helped make the nation an agricultural giant in the first place?