Clarkston is 'home' for many who are thankful to have left home. Mayor Ted Terry discusses the resettlement city. 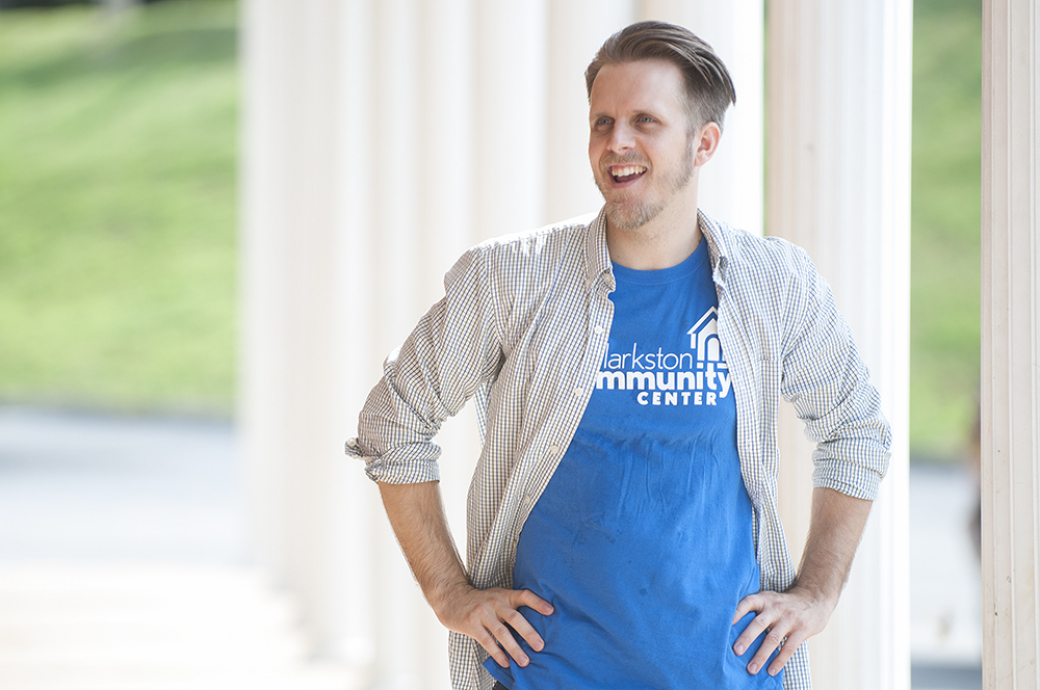 
Clarkston is ‘home’ for many who are thankful to have left home. Mayor Ted Terry discusses the resettlement city.

Clarkston, Georgia, is often referred to as “the most diverse square mile in America.” It began as a post office in 1876, and was incorporated a few years later as a town, named after Georgia railroad director W.W. Clark. Proximity to the GA railroad depot made Clarkston a natural for commuters en route to work in Atlanta, and its population grew from a mere handful in the 19th century to over 3,000 in the 1970s.

In the 1980s, refugee resettlement programs identified Clarkston as an ideal hub: Close to metro Atlanta, it offered public transportation and affordable housing. By the 2000s, people from more than 40 countries, and included African, Arab, West Indian, Asian Indian, Hispanic or Latino, and Central American immigrants, called Clarkston home. The city has embraced the influx of refugees and immigrants who now make up more than half its population (now at around 13,000).

Mayor Ted Terry, elected in 2013 at the age of 30, has taken his job out of city hall and into Clarkston’s coffee houses, restaurants, and parks to meet with his constituents. He recently spoke with CL about how the city continues to set an example of Southern hospitality that enables people from all corners of the globe to live and work together.

Creative Loafing: Clarkston has been referred to as a Southern “Ellis Island.”

Ted Terry: That quote has been bandied around over the years and has shown up in news reports. I think it’s pretty fitting. The only difference is, when people came through Ellis Island, it was more of a waypoint. People were there for a shorter period of time. The average refugee in Clarkston stays two to four years. As far as Clarkston being a waypoint, most of the new arrivals aren’t going to live in Clarkston for their entire lives, but once you get off at Hartsfield Jackson International airport, the resettlement agencies take you right to Clarkston. So in that regard, it’s your first glimpse of America.

What is Clarkston’s role in working with Immigrant communities in Georgia?

In terms of refugee resettlement, the city is home for someone who’s immigrating to America for the first time as a refugee. This person and their family come from a totally different country and with a different societal experience. Clarkston is a good place to tiptoe into becoming an American, to get the basics down before you become fully self-sufficient. Being a one-square-mile city, everywhere  you go — whether it’s the  school, the church, city hall, the downtown area — it’s all within a 10-minute walk of each other. It’s a little microcosm and, I think, it’s also a good example of an America that will be more diverse, with different ethnicities and races and languages. Clarkston also has a younger population (the average age is around 40), so in a lot of ways we’re seeing where the population trends are going, as well, it being a majority nonwhite population.

How did Clarkston become the epicenter of Georgia’s immigrant communities?

It’s a combination of things — the resettlement programs have been around since the 1980 and 1983 Refugee Acts. These are the framework federal laws that deal with who gets invited to America. I believe only one state in the United States doesn’t participate in the resettlement programs. Georgia is one of the 49 states that’s been receiving refugees for the last 35-plus years. Usually, it’s the capital city in a state. In Atlanta, refugees are resettled mainly in surrounding communities like East Point, certainly Clarkston, Sandy Springs, and College Park.

Back when Jimmy Carter and Ronald Reagan were president, the federal government provided two years of support for refugees. Now it’s down to six months. With tightened budgets, the government was trying to find places where housing would be more affordable. Clarkston became a good place to resettle a concentration of refugees so caseworkers didn’t have to drive all over Atlanta to visit with their clients. They could go to Clarkston and take care of large groups in an efficient way.

Then there’s the housing. Housing was always more affordable in Clarkston, particularly because the first wave of housing construction in Clarkston took place in the ’70s. But as Atlanta was growing, there was this huge vacancy rate here because of the condos and apartment complexes that were built for that initial wave of suburban flight. But it just kind of bypassed Clarkston. The city was perfect for keeping refugee families and certain kinds of national groups together.

Which came first, the diversity of Clarkston or Your DeKalb  Farmers Market? 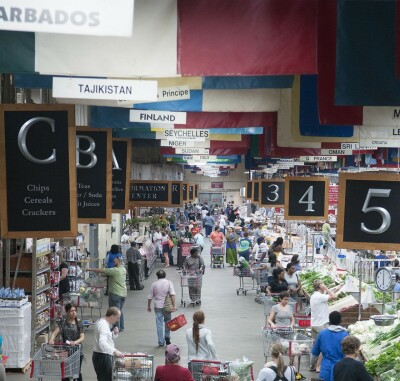 (Chuckle) Yeah, that’s a great question. Honestly, I’ve never read Robert Blazer’s book (Our World Market, “The Generational Distinction,” Our Connection To Life, written by the YDFM founder), but I guess the farmer’s market was started in 1977. I honestly do not know, but it would be great to find that out. I’ve never been able to get a meeting with him. It’s actually outside the city limits, so it’s one of those things where he doesn’t really need to know the mayor because he doesn’t pay taxes to our city.


You were saying that the federal funding for refugees under presidents Carter and Reagan was for two years, but now it’s cut down to six months. With the current administration in Washington, what’s happening to the program now?

The program has been tightened, and the cap has been lowered. This is the lowest level in the history of the resettlement program. The first wave of Vietnamese refugees came into Clarkston around 1981, 1982, 1983. America took between 150,000 and 220,000 Vietnamese refugees a year, so refugee resettlement was huge early on. In recent years, the level depended on year-to-year cap settings. Even after September 11th, 2001, the program continued. There were some pauses here and there for more enhanced security, but basically, under Obama, the last year of his office, the cap was set at 100,000. That was one of the highest it’s been in quite a while.

Trump reset the cap to 50,000, and next fiscal year the cap was lowered even further, down to around 30,000. So yes, this is definitely the lowest it’s ever been nationwide, which I find interesting.

I’ve been trying to get people to think a bit more introspectively about this. We hear a lot of the Republicans saying that they support immigration, but they want merit-based immigration and they want secure vetting. The resettlement program is literally the toughest way to immigrate to America. It’s a huge pool of people. They get whittled down through many redundant security background checks. Then there are further FBI checks. Then there’s a process of trying to identify refugees that will be more successful once they’ve immigrated to America. The system also engenders goodwill with other countries by helping to alleviate, in a small way, migratory and refugee crises around the world. It also allows America to be a little choosy in identifying the people who would be more successful by coming to America.

Also, if you already have a support network living in Clarkston, you’re much more likely to be resettled to your family support network, which makes total sense, right? If you’re trying to get charity, you want to have someone that you can rely on and someone who’s been in the country for a few years, maybe speaks the languages, has a place to live, can help you navigate — you know what I mean? If we want to talk about the best way to reform the immigration system, we should be increasing refugee resettlements, not decreasing them. The resettlement program is the most secure, highly vetted way to immigrate to America. It accomplishes a lot of our leadership-abroad goals. America has always been a leader in immigration, and the resettlement programs have proven to be very successful. It’s helped make Clarkston a great community to live in.

If you look across the spectrum, at so many of the really strong aspects of our community, one is that that you can point to leaders, people who are philanthropists, entrepreneurs. These are people whose parents came over as refugees, but then, the first American-born generation, the second generation, was able to really take the opportunity and turn it into something special. That clearly has influenced the trajectory of our nation’s history.

Are there more entrepreneurs coming out of Clarkston? Are the skills that officials are looking for showing up there?

Yes. When it comes to the small shop owner or the basket weaver or all the way up to an electrical engineer or doctor, I think that you’re going to get a gamut of potential skill sets, and to be clear, these refugees are people that are politically or religiously persecuted. When people who oppose immigration argue, “just go back home,” well, these people are literally in a classification under the Geneva Convention that, if they went back home, they could be further persecuted, tortured, or killed.

There’s also the untapped talent and the sheer resiliency of a person who has been through so much hardship and has still been able to survive, that when they make it this far — when they are given this really unique opportunity to start their lives over — that energy and resilience takes over. This is exactly what you would hope to get from an immigrant. This invitation from America is a chance to prove to America that it was a good bet and also that this will pay off for everyone going forward.

To me there is bit of a mixed message between pro- and anti-immigrant groups. What both can agree on is a very clear delineation — that if you’re going to immigrate to America, you have to actually give something in return, whether that’s gratitude or paying back the investment. There’s also the issue of crime. I think there needs to be a tough-love scenario.  You can say that we will be open and as accepting of other people as possible, but they have to play by the stated rules. If they break those rules, if they violate that trust, then they should lose the opportunity.

What cultures are represented in Clarkston?

We’ve had 40 nationalities and 60 languages over 35 years of resettlement. We have Bosnian families who were resettled here in the mid-’90s, after the breakup of Yugoslavia. If you follow the trends of where refugees are in the world — they have resettled here. Iraqis and Afghanis have been resettled, Nepalese, Rohingya, Burmese, Koreans, people from Bhutan, the Congo.

Last year we did a welcome reception for the Syrian refugees who resettled. In the past, we’ve done community potlucks. I haven’t seen if we’ve gotten one on the calendar for this year, but usually it’s either an agency or some of the other nonprofits who organize them. But we have lots of community dinners in the vein of a community potluck. Everyone brings a dish. It’s just sharing a table and sharing stories — it’s kind of the same thing as Thanksgiving — but it happens throughout the year.

And Mayor Terry, how do you celebrate Thanksgiving? You’ve given up your office at city hall and conduct city business in local coffee shops in Clarkston. Are you headed to a coffee shop or local diner to meet with the community, or will you get together with family and friends?

I’m consumed by the election right now. Once it’s over, I’m positive there’ll be some community friends who will have something going on. I usually get invited to a gathering every year. My parents live in Florida and I may not make it down there this year, so I’ll probably have a Friendsgiving of my own! — CL —