A Fresh Installment from CL's coverage of Atlanta's Neighborhoods

Creative Loafing interviewed Bryan Adams, the Vice President of Organized Neighbors of Summerhill, at the Park Pride conference earlier this Spring. The Summerhill and Peoplestown neighborhoods are located just South of Downtown Atlanta in the shadow of the former Turner Field and Atlanta-Fulton County Stadium.

The Summerhill neighborhood is undergoing dramatic change as Georgia State University and Atlanta developer Carter & Associates seek to transform a sea of parking lots and asphalt into a neighborhood that works for residents old and new.

Adams talks to us about the parks in Summerhill/Peoplestown, how he got involved in the neighborhood, and what changes he sees for his neighborhood.

Creative Loafing: “We're here with the Bryan Adams, who's the vice president of the Organized Neighbors of Summerhill. We’re here at the annual Park Pride Conference. The theme of this year’s conference is “Parks are the Heart of Community”. Bryan, how long have you lived in and been involved in the Summerhill neighborhood?”

Bryan Adams:  “I've lived in the neighborhood for 12 years.”

What made you get more involved in 2012?  Did somebody put a hand on your shoulder and ask you to get involved in a project - or did you put your hand up and volunteer?

Well, it was both. My neighbor was the President of the Organized Neighbors of Summerhill at the time, Suzanne Mitchell and they had a need for a treasurer. So being her neighbor I said – alright – and threw my hand up and said I'll do it.

Excellent ... so you quickly learned that it was more than just balancing the checkbook? You had to organize a few meetings ...?

“Was your work to tie together the green spaces in the neighborhood and support the existing parks in the Summerhill area?”

Yes. The mission was to build community and get people out and engaged. By focusing on the parks, it gave us a focus and a purpose - something we could involve everyone with.

We've been having a lot of conversations with neighborhood leaders but I can't think of any neighborhood that has as many challenges as Summerhill - really big macro issues. To have the repurposing of Turner Field and the involvement of big development interests, is a huge task. Summerhill is a critical part of both downtown and the way that downtown connects to its southern neighborhoods - it all goes through Summerhill or nearby neighborhoods, right?

Yeah. We are in the center of it all. It's all happening right here.

What has it been like since the Braves made their announcement that they were leaving?

It's gotten a little quieter, but we're cranking up to a 365 day a year neighborhood versus just being there 82 days a year on game day and having to deal with the traffic flows that come from them.

When you drive through the neighborhood you see an absolute sea of asphalt from all the parking lots. I know that there are parks tucked into different areas that are part of the plan, but what's the vision for Turner Field What's in the current plans?

Georgia State has been using the stadium for football for the past three years. They are also in the process of completing the first student housing complex – roughly 450 units. The whole property is maybe 80 acres. So a third or 30% of that is going to be Georgia State’s property. The remainder will be managed by a private developer.

So roughly 24 acres will be dorms?

So it's going to be more athletic focused for Georgia State ... The Braves were playing 80-plus games at their home field versus GSU football playing eight or so games doesn't have the same usage. Are more and more events likely to go into the stadium?

“Obviously they're using the field for football. I don't personally know what the plans are. They have hosted a number of concerts there.”

How has the neighborhood changed with the Braves not being there?

Did you go to a lot of Braves games living in Summerhill?

I did in 2007 but I ended up burning most of my purchased season tickets because I got better tickets from other people. But as time went on, I went to fewer and fewer games and the novelty wore off. I still miss the Friday night fireworks from my back deck, but I now have a coffee shop to go to.

You didn't have a coffee shop before, right?

Yeah. Georgia Avenue is coming back to life right now. I’m using the dry cleaner on Georgia Avenue as well. It was shut down sometime around August 2015.

On your grant for the Summerhill Parks, what are you looking to do with the money?

We hope to put in an amphitheater at Phoenix Park 3 across from MLK Middle School, reconfigure the entrance to the park, resurface the basketball courts and put in an exercise station. At Heritage Park, we want to put in a couple of wind sails or shade sails as the central feature there.

How big will the amphitheatre be?

Neighborhood size – it will probably be built in three stages. It's quite costly. So this is going to be more of working the land and at least put in our sweat and tears and then we'll go from there.

When you and the Summerhill neighbors came up with the ideas - the grant, resurfacing the basketball court, the amphitheater, how were the decisions decided upon?

It came from community involvement. As we got involved with Park Pride in 2013, I went to the ParkPride conference and submitted a grant for their help with a vision plan. We created a vision plan with these ideas. We submitted the application for the work in 2014 implemented the vision plan throughout 2015. In the vision plan, we looked at all of the parks, not just individual parks and thought about the beauty of Summerhill. We realized that our parks and the way they're situated is perfect for different kinds of activities suiting the diversity of neighborhood residents. So we've got a fast-pace for the younger crowd at Phoenix Park 2 where you have the ball fields and the playgrounds. We’ve got a little slower, laid-back crowd at Phoenix Park 3 across from the Senior Tower. The last park - Heritage Park - is a great vantage point to just go out and grab a book and watch the sunset.

The Summerhill neighborhood butts up against the expressway on the west side? Correct?

Yes. We have the connector to the west. We have I-20 to the north.

These neighborhoods on the southeast side of town are connecting to one another - particularly coming across from East Atlanta Village and Grant Park. The Summerhill neighborhood is the connector to Downtown, the West End, and to  neighborhoods to the South of Atlanta. What are you looking for in terms of businesses or amenities or development? What does the neighborhood want to see coming into the neighborhood?

Carter & Associates, the developer, has worked with us really well and as well with Park Pride. We've partnered with them on these parks improvements and we’re still feeling our way out there. We all have ideas and directions we'd like to go, but it really is going to depend on who does come in and just take the momentum and roll with it. We don't know if it's going to be a high rise hotel or high rise office park or if Georgia State University is going to maybe step it up a notch and do some more building for the campus. So we're at a very interesting point with lots of potential and lots of opportunities. Maybe it's going to be brownstones?  A lot of different concepts have been discussed.

But do you feel like you're getting the consultation that you would like from the development interests that are there,  in particular from Carter & Associates?

The process now is thinking about the macro impacts of the development. We work well together - they involve us with the process. For their businesses and for the plan to succeed, they really lean on the neighborhood to continue its support. We know as the property values increase so does the discretionary spending and that's when the direction may start to change. We don't know where we're going to be. There really isn’t a master plan on the whole development - it's more of a master concept. Carter & Associates haven't identified who or what's going to be where in particular but we’ve got our parks plan and we think the parks are going to flow as we’ve envisioned in our plan. We're going to need to connect some streets here and here and improve these and maybe change the street from a one directional to a bi-directional. But as far as who or what's going to end up being there, it's still up in the air.

What can Atlantans do to help you in your neighborhood? What roles can people play that you need?

We could use volunteers with the parks committee. We're working on a safety committee just to get people involved and on board to help us facilitate these plans and make this happen.

We know funds are limited. A few more people will move into the neighborhood and roll up their sleeves like you did, is that how you see this unfolding?

I was able to volunteer for another two-year term on the board. I think two or three, two-year terms is long enough. I kind of stepped up the game for the parks committee for the moment.

What is special about Summerhill?

For me specifically, it's full circle, as my family is from Atlanta. I'm now back and involved. I've been involved with development and parks my whole career and working within an existing community to see how that can change and develop is what I am about.

And what are the challenges that your neighborhood is facing?

Finding funding and finding help to bring our plans to life. We have this wonderful vision plan that Park Pride helped us put together in 2015, so trying to get that executed.

How many dollars are you looking for if you added it all up?

We're in the hundreds of millions [laughing] because we kind of threw on a plan to cap the interstate - that got a lot of support!

You mean a park over the Connector? What's on the other side?

Mechanicsville. It would be possible to reconnect the street grids with pedestrian connectivity to Capitol View or Capital Gateway between Hill Street and Connolly.

I know there was a lot of talk about building a cap over the highway in Midtown some years back. And I can't remember why it didn't go through - probably, cause it was insanely expensive.

Park Pride takes you through the vision plan and encourages you to think ‘pie in the sky” thoughts and ideas, but then you have to balance that with feasibility. When you're capping interstates, it becomes less and less feasible to imagine how to spend those dollars.

Well, if we all went out and bought a lottery ticket dedicated to Summerhill’s connector cap, maybe we get there.

Bryan thanks for joining us. We really appreciate it. On behalf of your neighborhood and Atlanta, thanks for all you do.

Summerhill Issues: How will GSU and Carter Develop Turner Field? 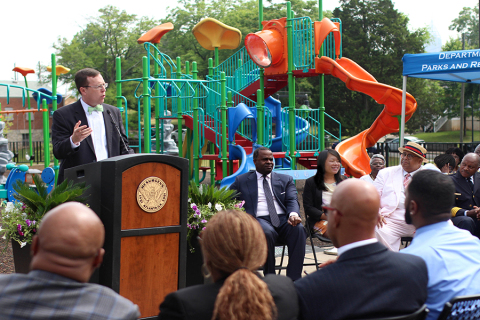 An Interview with the Executive Director of Atlanta's primary parks advocacy organization | more... 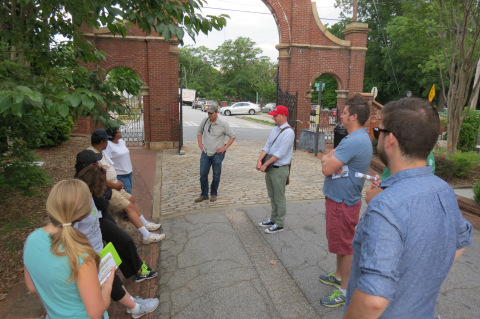