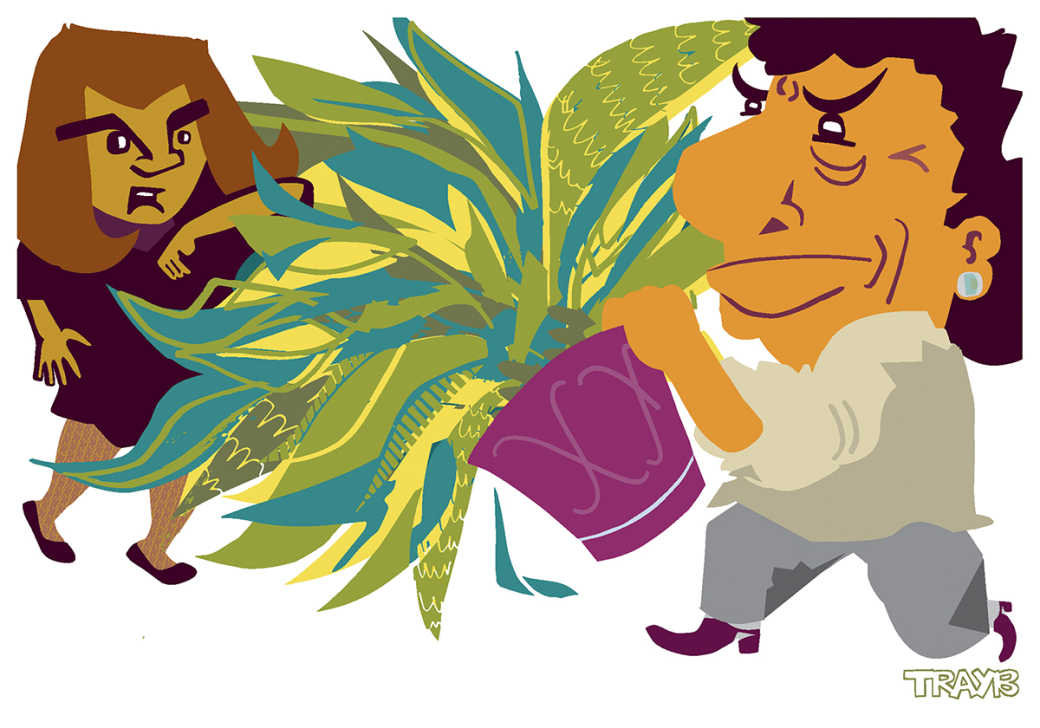 A mother-daughter spat turned ugly on Magnolia Street in northwest Atlanta. The 34-year-old daughter said her mother hit her over the head with a plant. The daughter showed no signs of serious injury and declined medical attention. The mother responded, telling police: “My daughter is a drug addict, and fuck that bitch, she is a hoe (sic).”

However the 52-year-old mother had a swollen eye and a big knot on her forehead. Also, the mother smelled of booze and admitted to having had “two shots earlier.” Also, “she was slurring her words and needed help walking because she was wobbling,” the cop noted.

Neighbors said they saw the mom hit her daughter with a plant … and also saw the mother trip and fall on her face, hitting the same location as her existing injuries. The mother kept cussing during her police interview and refused to stop screaming at her daughter. So police took the wobbly mother to jail for disorderly conduct while drunk.

SLIPPERY WHEN WET: At Hartsfield-Jackson International Airport, a 37-year-old man from Athens, Georgia, walked up to a Delta ticketing counter, whipped out his penis, and started pissing on the floor near the employees.

“When I arrived, I observed the urine on the floor,” the reporting cop noted. Also noted: The 37-year-old man was drunk out of his mind. Apparently, he had been denied boarding on an earlier flight because he was so frigging drunk. So he hung out at the airport for another two hours, then unloaded his pee spray on the Delta employees.

SLIPPERY WHEN WET, PART II: A 38-year-old woman said she was just waking up inside her apartment on Camellia Lane in the Lindbergh neighborhood, when she heard “rapid knocking.” She opened her door slightly to see if someone was there. “She stated (that) a woman with red hair and a black jacket barged into her apartment,” the reporting police officer noted. “The red-haired woman said that this was her apartment and would not leave.”

HOW TO LOSE $$ AND SELF-RESPECT: In the Westview neighborhood, officers responded to a marital dispute on Alvarado Terrace. The 40-year-old husband said he was arguing with his wife because he suspects her of cheating. His next move? Give her money.

“(The husband) then advised that he gave her $600 in cash, but now wanted it back,” the reporting officer wrote. “(The husband) mentioned that he wants a police report documented just in case he would like to pursue (charges) to acquire his money back from his wife.”

As for the possibly cheating wife — she was already gone by the time police arrived on the scene. Cops gave the despondent 40-year-old husband a courtesy ride to his aunt’s house on Collier Drive.

VEGAN THIEF WITH DESIGNER TASTE? In the Collier Heights neighborhood, a 26-year-old woman said she returned to her apartment on Peek Road and discovered someone had thrown a package of raw meat onto her bedroom floor. Also, $13,350 worth of her belongings were missing, including: a snakeskin Gucci wallet ($750); black Gucci boots with red laces ($1,200); black and brown Louis Vuitton boots ($1,200); purple-and-black Balenciaga shoes ($900); a brown Louis Vuitton duffle bag with a pink strap ($4,500); and a red Gucci purse ($900).

“I asked (the 26-year-old woman) if she had any enemies or someone whom she suspects could do something like this, and she said no,” the reporting cop noted.

STUPID CRIME OF THE WEEK: Around 11:30 p.m., a 34-year-old man was dining at Fellini’s Pizza on Ponce de Leon Avenue. Suddenly, a Fellini’s manager walked up and informed the 34-year-old man that someone had just broken a window on his black Jeep Grand Cherokee in the restaurant’s parking lot.

The 34-year-old man went outside and saw his front driver’s-side window had been smashed.

Did the perps steal anything from his car? Nope. “The vehicle was not entered,” an officer wrote.

And how did the window-smashers get to Fellini’s? Oh, in a new black Jaguar.

Cops reviewed Fellini’s surveillance footage and saw what appeared to be a brand-new black Jaguar roll into the parking lot. The Jaguar driver parked right next to the 34-year-old’s jeep. Two men with flashlights hopped out and began looking into nearby cars. Then, Fellini’s manager and another employee ran outside and started screaming at the two men, who hopped back into their Jaguar and left.

BITCH OF THE MONTH: A 26-year-old boyfriend and girlfriend got into a bad argument at his home on Calloway Drive. According to the boyfriend, the girlfriend smashed his TV on the ground; poured bleach on about $1,000 worth of his clothes; and broke the rear windshield of his silver Toyota Camry. All her shenanigans took place in front of the boyfriend’s 73-year-old grandfather. The girlfriend was long gone by the time cops arrived. Ironically, the boyfriend told police, his girlfriend lives on Valentine Street (which may or may not exist). —CL— 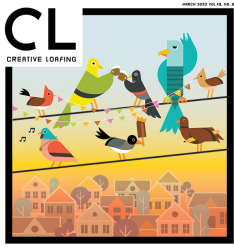