Atlanta according to Dr. Dax

The Dungeon Family member, muralist, and self-proclaimed social butterfly on the city's good, bad, and ugly 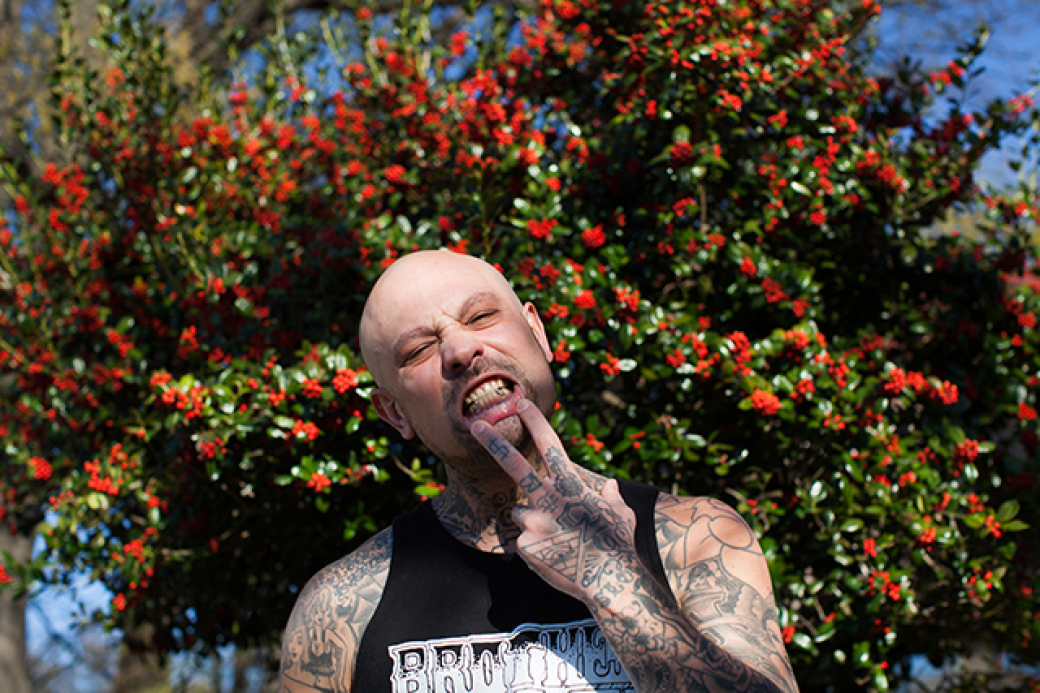 Dr. Dax has seen it all since making Atlanta his permanent residence back in 1985. The accomplished graffiti writer, muralist, photographer, and socialite's work can be seen anywhere from the buildings on Edgewood Avenue in Old Fourth Ward to inside the clubs of nightlife haunts such as El Bar and Tongue and Groove. When he's not hopping from city to city to lend his creative talents to others, chances are you can find the Dungeon Family's tattooed, street prognosticator sitting on his front porch telling stories of ol' ATL in the Westside neighborhood he's called home for past 20 years.

My biggest pet peeve about Atlanta for sure would be the fact that they tore down all the legendary neighborhoods — projects and lower-income areas — which made this place an urban environment, which makes a city a city and not suburban town.

My favorite building in Atlanta was always the IBM building because it looked like a real fucking city building. Other than that, I would have to say there's got to be an abandoned building I think looks sick. There's two mansions on Ponce and I've always kind of dreamed of making those my home — just being the richest fucker on that street.

Ray Murray is my favorite living Atlanta just because [if he had not existed] so much shit about me and everything around me, and people I know, none of it would have ever happened. There would be no OutKast, Goodie Mob, Dungeon Family ... graffiti would not be as advanced — not that it is advanced here or ever was — but it wouldn't have been there if it wasn't for Ray Murray. He's the most important figure in our generation, and our lives and culture.

My favorite place to drive in Atlanta is Murphy Avenue. You can drag race that motherfucker right there. Even if the cops see you, you're on the other side of the tracks. And, of course, rolling down Boulevard. That's a prime flex zone.

My favorite place to walk in Atlanta is down the side of any railroad track. I like to walk down the bridges in Castleberry Hill overlooking the train lines. Walking Little Five Points and Ponce are good for social run-ins.

Right now on Edgewood Avenue is where I find the most inspiration in Atlanta. I go down there and get fucked up and come up with a lot of ideas. Atlanta's had emerging culture and it just happens to be planted there right now. I thrive off social energy.

Train spotting is where I got to get in touch with nature. Watching trains is a place where I fucking find Zen.

Three Atlanta artists I follow are R. Land, he's one of the sickest dudes. Cousin Dan's art is sick. I'd have to throw Paper Frank in there too because I just recently started hanging with that guy and he's motivating.

The square in Little Five Points could use more love. All those fucking squatter punks — they should clean those fuckers up. Go give them some showers. Those dudes could use some love.

Hae Woon Dae is my favorite place in Atlanta that most folks don't know about. It's a 24-hour Korean spot, and it's a hidden treasure to me. It's 24 hours, that's like the Korean Waffle House.

The best view in Atlanta is being on the Sun Dial, but also having your own room downstairs. That's the player-est shit ever.

Pulling out muscle cars is the Atlanta tradition that should be brought back. Motherfuckers pulling their cars out on any given night, but especially on Saturdays and Sundays. Everybody was pulling out so many fucking cars with rims that Freaknik was emerging even when it wasn't a specific Freaknik weekend. Everyone was cruising from Greenbriar Mall to West End Mall to Lenox. It was a traffic jam built off flexing.

If I was Atlanta's mayor for one day, one thing I would change are those [lanes] where you have to stop for pedestrians — that's bullshit. If you're trying to be green, one person walking across the street shouldn't stop 10 cars, and make them go again with all the fuel pumping out of the pipes. It would be more green if you stopped and waited for the cars. That's something I would change right off the damn rip. The other obvious thing is there should be some strict coding to the age of buildings and whether they get torn down, restored, or just left the hell alone. You've got to have something from history. People go to cities to see history and if you take it all down this shit ain't nothing worth seeing. We're losing a lot of flavor here.