OUTLANDISH CONSPIRACY THEORIES: The adventure of the disappearing budget surplus

The sordid origins of the scapegoating of Anthony Tricoli

“I am concerned and frankly angry … reserves are down almost $4.5 million and overall Auxiliary reserves are down by $3.2 million … It appears that any funds Auxiliary Services had to make a significant contribution to our institution are gone with no explanation.” 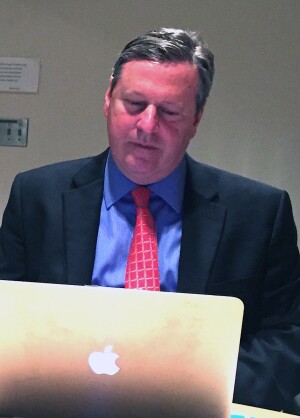 It did not take Sherlock Holmes to figure out that something was seriously wrong with the financial reporting at Georgia Perimeter College (GPC) in 2012. It is less obvious how it was missed, or buried, by the University System of Georgia (USG) — leaving approximately $10 million unaccounted-for today — and why no one in the USG or Attorney General’s office is looking into where the money went.

The USG is the state government entity that oversees Georgia’s 26 public colleges and universities, including their budgets and finances. It used to include both Georgia Perimeter College and Georgia State University until a merger helped keep a financial scandal — that affected both schools in 2012 — below the radar.

The USG has its own department of finance and team of auditors who administer $10 billion in annual spending and financial reporting — 1000 times the amount unaccounted for at GPC — and are supposed to prevent such scandals, not hide them from the public.

Here is what the USG should have known — from state records that I made public by filing them into court — about the financial scandal at GPC in 2012:

A large reserve fund was built up by former GPC President Anthony Tricoli from 2006 to 2009, $20 million at its height. Those reserves were secretly depleted starting in 2009. During the period from 2009 to 2012, GPC Vice President of Financial Affairs Ron Carruth continued to report sanguine surpluses even as he was withdrawing all the funds from the reserves — for purposes that are still not fully known, seven years later.

In 2011, for example, Carruth reported to the school’s faculty senate that revenues at GPC were running $37 million ahead of spending. At the same time, internal documents never shared outside Carruth’s office show that Carruth was asking budget director Mark Gerspacher to take $1,500,000 out of the school’s reserves to pay the bills, which would not be necessary if revenues exceeded spending.

Carruth continued to make these knowingly false reports of a rosy financial picture to the GPC administration straight through the end of April 2012, when the USG announced, out of the blue, a $16 to $25 million deficit at GPC.

In January of 2012, three months before that dire deficit announcement, Keith Chapman, the manager in charge of GPC’s reserve fund, shot off a sizzling email asking why approximately $8 million was “gone with no explanation” from the auxiliary reserves.

An even more important question is why this information was never shared with the faculty senate, the executive committee, or the president’s cabinet, consisting of the top school officials. Why was it never reported to GPC President Anthony Tricoli, as required by GPC Policy 302?

The knowing falsification of the state agency financial reports, including misrepresentations by omission, is a felony under OCGA 16-10-20.

We do know that there was a trail of more emails, orchestrated by Carruth's Assistant VP of Finance, Sheletha Champion, among members of Carruth’s staff after Chapman’s January warning bell.

In March of 2012, even as Carruth continued to report healthy budget surpluses, Champion wrote an email to USG financial oversight officials documenting a $12.8 million negative balance at GPC. After firing Tricoli in May of 2012, the USG claimed it had no prior knowledge of the GPC arrears, contrary to Champion’s email.

Two months after the budget hearing, Carruth went to Tricoli’s office that morning and admitted there was actually a small problem, maybe a million-dollar shortfall, which was exceedingly strange since it directly contradicted Carruth’s prior reports of copious surpluses.

Tricoli called Huckaby the same day, and asked for audit assistance from the USG. Huckaby sent some of the same USG finance personnel who had already received the $12.8 million deficit report from Champion the month before. The next day, these USG finance officials announced they had discovered an $8 to $16 million deficit at GPC.

The USG finance officers claimed they discovered this deficit by poring over GPC’s books overnight. Yet the figures they supposedly calculated the night of April 25 corresponded exactly to the $12.8 million deficit report Champion sent the USG over a month before.

The very next day, April 26, Wrigley falsely informed the Board of Regents that the USG had just learned of this unfortunate development (the same one the USG learned about in March and withheld from the GPC administration). Huckaby went Wrigley one better and demanded Tricoli’s immediate resignation.

Then-Attorney General Sam Olens never investigated these discrepancies, but instead ended up defending Carruth, Champion, Wrigley, and the other USG officials who concealed their knowledge of the deficit in violation of OCGA 16-10-20. Olens argued that Tricoli, instead of accepting reports from his VP of finance and USG financial officials, could have gone and looked at the accounting worksheets himself to determine that they were lying to him.

Olens also nixed a criminal investigation, called off an outside audit, allowed the USG to review itself, and took no further action — even when USG, in its final report, still could not account for $10 million by September 2012.

After shutting the lid on what happened to the money, Olens received the Charles Weltner Award for open government from the Georgia First Amendment Foundation.

The USG appointed Olens to a $500,000-a-year job as president of Kennesaw State University, which had its own financial scandals, including a fraudulent USG audit used to oust the former president, Dan Papp, to make way for Olens to be appointed.

When Tricoli refused to resign back in 2012, alleging criminal fraud, Huckaby had one more trick up his sleeve. He offered Tricoli an alternate position in the USG central office if Tricoli would leave GPC quietly. Before Tricoli could respond, Huckaby announced to the Atlanta Journal Constitution that Tricoli had already been transferred to the USG central office.

The day after announcing Tricoli’s new position, Huckaby submitted to the Board of Regents — without Tricoli’s knowledge — an interim president for GPC, Rob Watts, one of the USG officials who had been in regular contact (which the USG denies) with Carruth and Champion.

A day after Watts was appointed, Huckaby presented Tricoli (who still did not know he had been replaced as GPC president) with a termination letter — on the pretext that the Board of Regents did not reappoint Tricoli, when in fact Huckaby never submitted Tricoli's name to the Board of Regents for reappointment, submitting Watts' name instead. The alternate USG position Huckaby announced in the media vanished into thin air. On the very same day Tricoli was fired from two jobs at once, the USG announced a plan to conduct its own review of the financial crisis at GPC (the same review that never accounted for $10 million).

Before this after-the-fact investigation started, more negative AJC stories followed hard upon this reassignment ruse, based on information from the USG telling the AJC that Tricoli “dipped into the reserves.” Internal documents show USG officials discussing misleading the AJC. Tricoli, who had just won a national award as the best college president in America, was never able to get another job in higher education.

Huckaby, after pulling this bait-and-switch scheme supported by a phony USG report — the same MO used to ruin Papp — retired and was named Georgian of the Year by Georgia Trend magazine.

Tricoli got no help from the courts, either. Judge Coursey said Tricoli lost all his contract rights when he was tricked into resigning. Coursey added that Tricoli’s claims under the RICO Act for knowing falsification of state agency finances, a felony under OCGA 16-10-20, were immunized because state officials who knowingly falsified GPC’s finances were performing their assigned “financial oversight activities.”

Interestingly, no one seems curious about what happened to that $10 million in taxpayer money. Attorney General Sam Olens never conducted a criminal investigation despite allegations and evidence of fraud. The USG concluded after its own review that there was no way to know what happened to the money. Governor Deal had no interest in an independent investigation, and Governor Kemp is thinking about it, but has not officially responded. As the fight continues on appeal, Tricoli maintains that, contrary to the ruling of Judge Dan Coursey in DeKalb Superior Court, intentional falsification of state financial reports to conceal the theft of taxpayer money does not qualify as “financial oversight,” and that state officials are not immune for their criminal conduct.