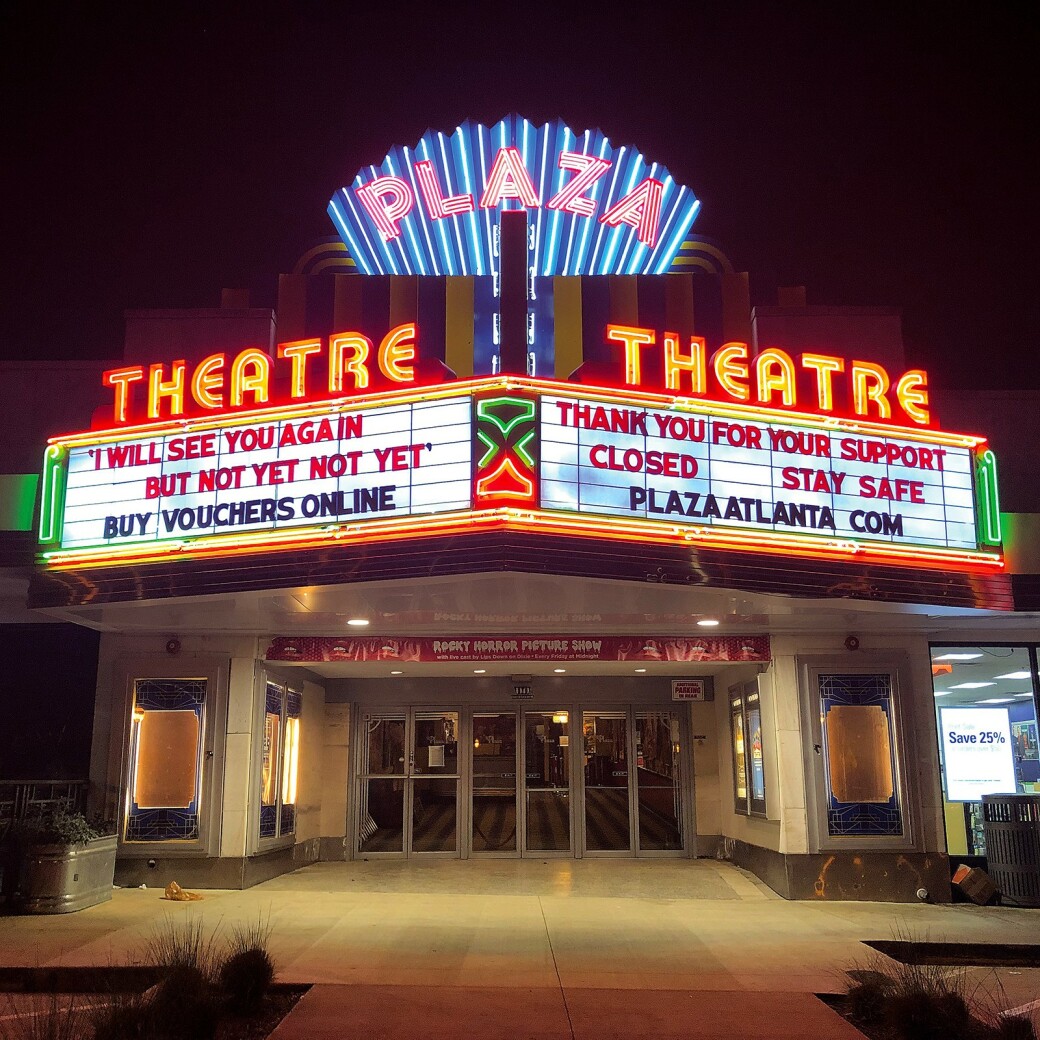 Photo credit: Courtesy of the Plaza Theatre
KEEP THE LIGHTS ON: The Plaza Theatre’s vintage marquee on Ponce de Leon.
By Curt Holman Friday May 1, 2020 12:00 AM EDT

The last movie I saw in a theater was The Invisible Man in late February, blissfully unaware that in a few weeks, the whole world would be worried about an invisible threat. After almost two months of sheltering in place due to the coronavirus, I’m wistfully remembering past times at the cinema.

One of my favorite experiences at the movies was a 2007 preview screening of Robert Rodriguez and Quentin Tarantino’s Grindhouse at the Plaza Theatre. Having opened in 1939 — and survived the changes its Poncey-Highland neighborhood has undergone in the years bookended by urban flight and gentrification — the Plaza has shown its share of B movies, XXX-  rated fare and schlock in the ensuing decades. And, as usual for the vintage movie house that has survived such change, the evening brought out exactly the kind of film buffs who’d appreciate the double feature’s fake trailers, cameos, and simulations of old, scratched prints in a proudly resurrected film emporium that once screened exactly such pairings. It was a gory, raunchy delight.

And even though you can rent Rodriguez’ Planet Terror and Tarantino’s Death Proof, as well as find various bonus features online, home viewing can never match the charge of seeing Grindhouse with those people, in that venue. I find myself missing the ritual of passing under the Plaza’s art deco marquee, walking past the vintage movie posters in the lobby, smelling the fresh popcorn, and settling into the old-school cushioned seats before a show begins.

Atlanta has several theaters like the Midtown Art Cinema, part of the Landmark theater chain, that offer nice places to see art-house films. But the Plaza is the kind of independent theater that combines love of cinema with old-fashioned, idiosyncratic touches, feeling at once like a museum and a clubhouse, that make the mainstream cineplexes of the Regal or AMC chains feel cold and sterile. As a native Atlantan, I grew up in what now seems like a golden age of repertory movie houses, including the Film Forum, Garden Hills Cinema, the Screening Room, the Silver Screen and the Rhodes Theatre. With all of them long gone, the Plaza can feel like Atlanta’s last picture show.

The Plaza, like businesses worldwide, has been struggling to survive a landscape virtually bereft of customers now that the COVID-19 pandemic is holding hostage much of our daily lives. “This is the longest the Plaza has ever closed — by far,” said Chris Escobar, Plaza Theater owner and executive director of the Atlanta Film Society. “It’s never been closed more than a week, and that’s usually been for (repair) work or a filming.”

In mid-April, Escobar announced a partial but substantial furlough for the Plaza’s employees, with a limit of 12 working hours per week. He’s embarked on multiple different fundraising efforts and revenue streams, such as vouchers, concessions to go, and merchandise sales, as well as applying for such relief programs as the Federal Paycheck Protection Program (PPP) and the Art House Convergence relief fund.

“Right now I’d say we have a month left of being able to keep paying staff even on a limited basis without something big coming into play like the PPP program. Some of these things would add up and make that possible,” said Escobar, who acknowledged the uncertainty and enormity of the challenge facing the Plaza. He’s also negotiating with the theater’s property owner for flexibility: “They have a real opportunity to either be the hero or make it impossible for the Plaza to re-open.”

His choice was complicated by Georgia governor Brian Kemp’s April 20 announcement that movie theaters in the state could open on April 27. “I honestly didn’t think we would be allowed to re-open until June,” Escobar said in a statement on the theater’s Facebook page. “While nothing would make me happier than all of this being over and getting the ‘all clear,’ other than there being political pressure, I haven’t seen anything of the sort.

“This definitely feels like we’re getting pushed to sort this out on our own, and public health officials do not seem to be recommending this at this time,” the statement continued. “While we believe nothing is better than watching a movie in our theatre, we want to offer options that our customers are comfortable with and that keep our staff safe. We didn’t wait for government to start taking actions to operate more safely, and we aren’t going to drop our guard in any haste now.”

Escobar estimated that May 1 would be the earliest the theater would consider reopening in any capacity, most likely with some kind of alternate programming that permits safe social distancing, such as “Plaza Pop-Up Drive-In” screenings.

Meanwhile, the Plaza website (plazaatlanta.com) lists several ways to support the theater, including a page for GoFundMe donations toward a $25,000 goal as well as the option for private screening rentals of groups of less than 10 people. Subscribing to the Magnolia Selects curated film service using the code MOVIE589 will give the Plaza 100 percent of the proceeds.

While home viewing is no substitute for being there, the theater’s virtual screening room can at least connect Plaza supporters to films. In partnership with Kino Marquee, a nationwide initiative from the Kino Lorber film and video studio, the Plaza is virtually screening the kind of hot art-house fare it would show in better days, including the acclaimed socially-conscious Brazilian western Bacurau and the Irish supernatural comedy Extra Ordinary featuring Will Forte. 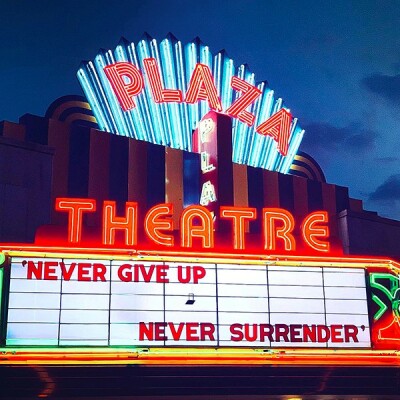 Capital in the Twenty-First Century opened May 1 and offers 50 percent of its ticket sales to the Plaza Theatre. Based on the influential book of the same name by French economist Thomas Piketty (who appears in the film), the documentary presents an energetic and devastating lesson in economic history. The historical material covers pretty familiar ground, but the latter half offers powerful depictions of how wealth inequities create an increasingly unequal society with decreasing options for social mobility.

In addition to Kino Marquee, Escobar says “We’re going to be launching a new digital platform in partnership with the Atlanta Film Society called ‘PlazaPlay,’ where our joined audiences can do individual rentals (and eventually a subscription) to a variety of indie, cult, and rep programming alongside companion content that includes special intros, Q&As, and more.”

Thinking back to the titles of Grindhouse, “Planet Terror” seems an apt way to describe the global attitude during the pandemic. One can only hope that, after 80 years, the Plaza will continue to be “Death Proof.”

Double Up: The Plaza had its own big-screen cameo last fall by appearing in a scene in Doctor Sleep, based on Stephen King’s sequel novel to The Shining. Audiences seemed to sleep on the spooky follow-up, but sheltering-in-place gives viewers a chance to catch up. Why not schedule an in-home double feature of Stanley Kubrick’s classic The Shining followed by Mike Flanagan’s Doctor Sleep? You can even mix “Redrum” cocktails to go with it.

For lighter fare, try an evening of Emma. Autumn de Wilde’s new adaptation of Jane Austen’s novel Emma was one of the first films to respond to the restrictions against gatherings to become a “first-run” online release on March 20. Pair it with Amy Heckerling’s take on the story, Clueless, transferring the comedy of manners from Regency England to 1990s Los Angeles, with a hilarious, career-defining performance from Alicia Silverstone. (You could even make it a triple with Douglas McGrath’s 1996 version of Emma, starring Gwyneth Paltrow.)

And for seemingly light musical-comedies with a bittersweet edge, That Thing You Do! (1996) and Josie and the Pussycats (2001) offer breezy satire of the pop music industry with contributions from Fountains of Wayne’s singer-songwriter Adam Schlesinger that sound like authentic chart-toppers. Schlesinger died of the coronavirus in April, and his joyful pop remains the perfect tribute. —CL—