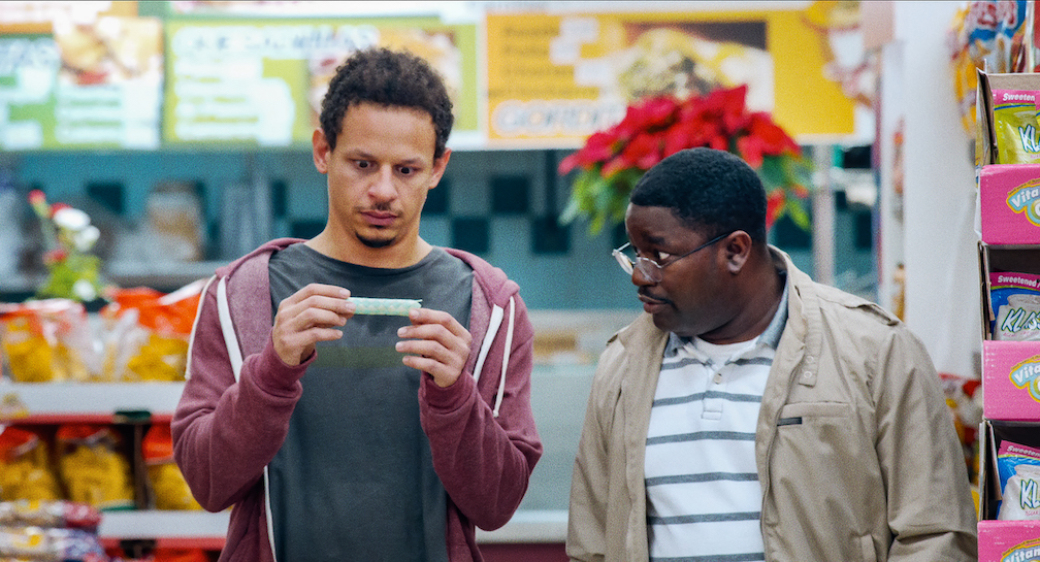 Photo credit: Courtesy of Netflix
WHAT’S THE WORST THAT COULD HAPPEN? Eric Andre and Lil Rey Howery in ‘Bad Trip.’
By Curt Holman Wednesday May 5, 2021 10:27 am EDT

Like migratory birds, superheroes have been flocking back to Atlanta. For most of the 2010s, Georgia has provided a happy habitat for movies and TV series about caped crusaders … until the pandemic put them on hold.

Many paused productions resumed last summer but have not been released until recently, along with completed films that were either postponed or shuffled to streaming services. But as of early 2021, audiences have been able to see Atlanta as the backdrop for superpowered heroism. The Krog Street Tunnel doubled for the lawless nation of Madripoor in “The Falcon and the Winter Soldier” on Disney Plus. Local landmarks like the Little Five Points Community Center and the First United Methodist Church made cameos in Netflix’s wan superhero comedy Thunder Force.

Major Marvel and DC films shot locally will screen theatrically this summer, with the thrice delayed Black Widow scheduled for July 9 and The Suicide Squad on August 6. The most impressive local heroes, however, may be the Good Samaritans of the comedy Bad Trip, who show no superpowers but common decency.

Currently available on Netflix, the hidden-camera road movie has a scripted through-line, as an underachiever (Eric Andre) resolves to drive from Miami to New York to pursue an old flame. He convinces his best friend (Lil Rey Howery) to “borrow” a car belonging to his convict sister (Tiffany Haddish), but she breaks out of jail and pursues them in a rage.

Films based on pranking or deceiving unsuspecting passersby, like Borat or parts of the Jackass franchise, can have a mean-spirited quality: They treat onlookers like unwitting improv partners, provoking them to get a reaction. Bad Trip definitely captures people getting flustered with Andre, Howery, and Haddish’s antics. In one of the first scenes shot, Andre and Howery have their penises connected in a Chinese finger trap, then go into an Atlanta barbershop and are chased out at knifepoint.

For the most part, Bad Trip avoids making innocent bystanders the butt of the joke, instead setting up elaborate public disasters to befall the actors. It can be quite touching — as well as laugh-out-loud funny — to see people step up to help them, like the woman to tries to save Howery from sinking into a portable toilet, or the nurse who rushes to Andre’s side after he suffers a spectacular fall at Kennesaw’s now-closed Electric Cowboy. An army recruiter consoles a heartbroken, seemingly-deranged Andre at a low point.

Directed by Kitao Sakurai, Bad Trip demonstrates how to make a cross-country movie primarily in the Metro Atlanta area. It was filmed between October 2017 and December of 2018 in Georgia (along with scenes in New York, California, and South Carolina). While establishing shots and on-camera maps place the cast moving up the East Coast, many unscripted gags were filmed at relatively nondescript Atlanta locales. A title says “Trenton, N.J.” but cuts to Midtown Atlanta’s The Original J.R. Crickets, where diners seemed thrilled to have ringside seats to the characters’ messy drama. Near the end, Haddish chases Andre from a New York gallery, down a few blocks and up a rooftop, where their conflict plays out in view of customers of the Atlanta-based food truck, The Blaxican.

The closing credits include scenes of Andre and company revealing the truth to their victims, the laughter and hugging ending the film on a note of good cheer. Of course, these are the happy responses: Reportedly, the final scene at a fancy gala had to be reshot in California because the dupes at the Atlanta-filmed version were too angry to sign permission forms afterward. But even though Bad Trip makes sport of ordinary people, it also has the attitude that they’re the real heroes.

Hello, I Must Be Going: With U.S. vaccinations well underway, Atlanta moviegoing is inching closer to normalcy. Many local cinemas have reopened under safety protocols, with the main holdouts, the Regal theater chain, scheduled to open their doors this month. Such venues as Atlantic Station and Regal Hollywood 24 are set for May 7, Perimeter Pointe on May 14, and the Tara Cinema on May 21.

But while the movie theaters are coming back, the moviemakers might be leaving. After the passage of Georgia’s restrictive voting rights laws, SB202, many filmmakers are opting to boycott the state. Ford v. Ferrari director James Mangold has vowed not to film in Georgia, while Will Smith and director Antoine Fuqua announced that their historical drama Emancipation would be relocated to another state.

Other screen artists are critiquing SB202 while doubling down on their support for the local filmmaking community. Director Ryan Coogler announcing that Black Panther 2 would stay in Atlanta while calling out SB202 for “its shameful roots in Jim Crow.” It’s a relief that Atlanta will continue to double for the nation of Wakanda even as other superheroes may choose to fly elsewhere. —CL—